The next morning I enjoyed a leisurely shower before Jim and Dave got up. After a stop for breakfast, we had a good ride to Prince Edward Island. Although dark clouds circled around us, we didn’t have any rain until after we crossed Northumberland Strait via Confederation Bridge. On the island, we stopped at the Tourist Centre where we discovered internet connection, so we took the time to catch up on emails and check for orders on our online stores. It was with mixed feelings that we learned there were no orders, which are more difficult to process while on the road, but help pay for the trip.

The sun had been shining when we entered the building; black clouds greeted us upon our exit. We rode for only about ten minutes before the rain started, forcing us to pull into a gas station to struggle into our rain gear, and fill up the gas tanks, and by then the rain had retreated. But, we caught another deluge in a few more minutes. It lasted only five minutes and that was the end of it.

At 4:00 p.m. we were knocking on the door of our friends’ cottage at West Point, and were quickly immersed in Maritime hospitality when neighbours began showing up and bottles of rum or beer were broken open.

After dinner we all went for a stroll along the beach and watched a beautiful sunset. We didn’t need to strike our tents for the next few days, as beds were offered in the cottage.

In the morning we decided to ride the bikes to Skinner’s Pond, home of Stompin’ Tom Connors. We visited a fishing harbor, and enjoyed a lunch of mussels and Seaweed Pie at the Seaweed Pie Café. We learned all about the harvesting of seaweed and it’s uses, before continuing on to the Tourist Centre and the Windmill Farm on the most westerly point of the island. 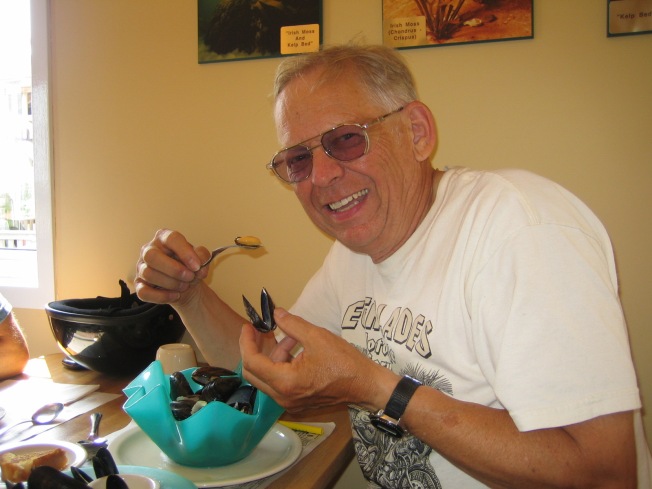 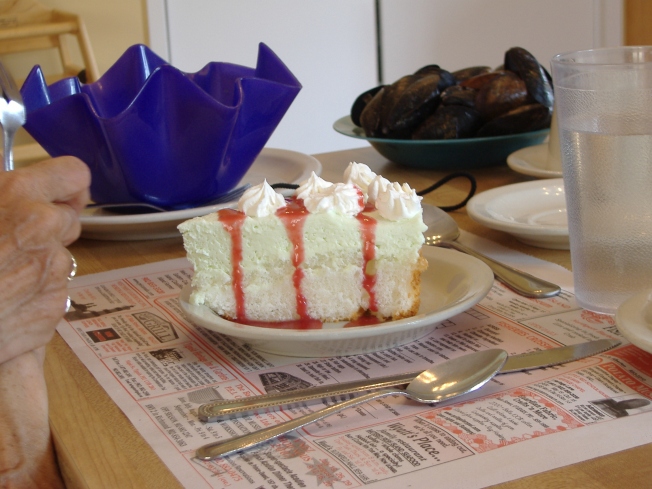 Seaweed Pie, not what you’d expect,

Our last day was a hot one. Our friend Meg and I went into O’Leary to do some grocery shopping before Jim, Dave and I headed out on the bikes again. We left the jackets off when we rode to Summerside to the Tall Ships Festival. Having endured a half-hour of sitting in the blazing sun at a road construction site, upon our arrival in Summerside we were disappointed to find that only two of the ships had docked, one being the Bluenose, which we’d all toured before. So after a stroll along the shore, a light lunch, and another stop for ice cream, we returned to the cottage in time for the delicious scallop dinner that Meg had prepared.

The evening ended with us clapping our hands and stomping our feet at a Gaelic music concert in a nearby church.