The Kaslo River was often subjected to severe flooding during the 1800s. In 1895-96, during the rebuilding of the town after one such flood, the first hydro-electric system was included in the construction. It was privately operated by George Alexander. Kaslo Creek (River) was rerouted southwards into the current channel. In 1914 the City of Kaslo purchased Kaslo Power and Light for $27,000. It was upgraded in 1931 to be fully automatic. Another flood occurred in 1948 and in 1962 the power utility was abandoned, putting Kaslo onto the BC Hydro grid.

Hiking trails began to develop along this abandoned land, but they were treacherous. In 2005 the many townspeople who like to use these trails formed the Kaslo Trailblazers Society and began the Kaslo River Trail Project.

Many volunteer hours over the past ten years have resulted in two beautiful, safe hiking trails along both sides of the river, joined by red-stained wooden bridges at each end, both built by the volunteers. Where parts of the trail have become flooded in recent years, new higher links have been created and reinforced with wooden steps. Rope railings to assist with the climb, and wooden or steel benches, dedicated to donors, make the hike more friendly to people of various physical fitness. Animal-proof garbage cans have also been added to help keep the area clean.

And the scenery is fantastic!

Hiking along the river trail 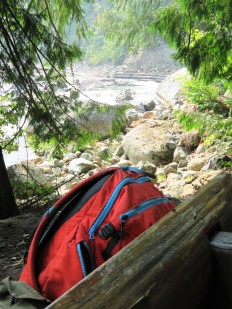 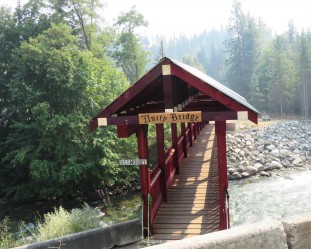 A few old remnants from days past 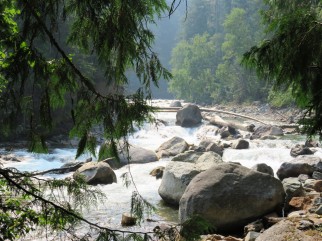 Looking down from a higher trail 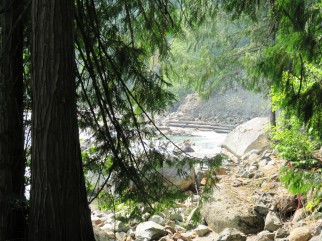 The water is mesmerizing