I wonder how many people get a newspaper delivered to their door these days? I know there are some, but they are usually delivered by car. Are there “paperboys” (or girls) anymore? It’s been a long time since I’ve noticed any.

When I was a kid, every neighbourhood had a paperboy. I don’t think it was something girls did back then, but I remember helping out a couple of times:

I was outside on the verandah of our white clapboard house, wearing my brand-new, brown sandals, when my brother, who was nine years older, picked up his bag of newspapers and asked if I wanted to help him deliver them. 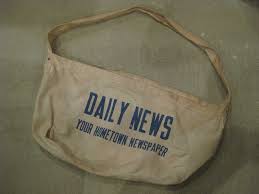 “Yes!” I cried with delight and ran down the steps.

I didn’t notice that the sky was becoming a little dark, but my mother did.

“Change your shoes, Judy.  It’s going to rain and you’ll get your sandals wet!”

Too late! I was already headed down the street chasing my brother.

Robert handed me a newspaper and told me on which doorstep to place it, while he did the same on the other side of the street.

It wasn’t a big route and we were finished in about half an hour. But before we made it home, the clouds opened with a burst of rain that was soon pelting down on us and swirling in huge puddles on the street and sidewalks. I splashed home as fast as my little legs would carry me, but much to my mother’s chagrin, my new sandals were now soggy, and I got a tongue lashing. I don’t remember how the sandals fared after they dried out, but I suspect that they stayed together and I wore them until they no longer fit me.

I remember another time when I was walking home from somewhere, older then, when another paper boy stopped to ask me if I could deliver a paper for him on my way by a particular house. Being shy and unquestioning, I took the paper and knocked on the door, but no one answered. I must have been told to deliver it directly because I remember that I didn’t know what to do with it. I vaguely recall taking it home and asked my dad.  He told me that the boy shouldn’t have given it to me, but he made sure it got delivered.