When we left New Orleans we headed in the direction of San Antonio, Texas. Traveling along Hwy 90 was the worst road we’ve ever been on. It is made of concrete slabs and they have all heaved just enough to cause the RV to thump over the uneven seams with each set of axles. Dishes rattled, doors and drawers that we thought were secured banged open and closed. My body began to ache and my head began to pound. At one point we turned off it to take the much smoother service road that ran alongside it, until that took a turn north before meeting up with 90 several miles later. It was 4:45 pm when we crossed the border into Texas and were back on I-10.

Jim takes a break under the Texas Star

At 6:30 we stopped for dinner at a Cracker Barrel near Houston and called it a day. Most Cracker Barrel Restaurants have parking spots at the back just for RVs and as long as there is space, they are welcome to stay for the night. Of course it’s good for business because we always return for breakfast.

By 2:00 pm the next day we were entrenched in the San Antonio KOA. We unloaded the bike and rode downtown. After finding a spot in a nearby parking lot, we walked to The Alamo and did the tour with headsets that told us the history. It’s an interesting story.

And the gardens around it are beautiful.

The sun was hot, so the cooler air that enveloped us after we descended  the stairs to the River Walk was a welcome relief. We strolled on the walkway beside the river banks, and checked out the many restaurants before settling on an outdoor café that featured polish sausages, sauerkraut (or potato salad) and fresh baked pretzels.

While we ate we were entertained by two fellows dressed in German-style knickers, vests and hats. One played an accordion, the other a lap drum kit; both sang and told jokes. They quit about the time we were finished eating. 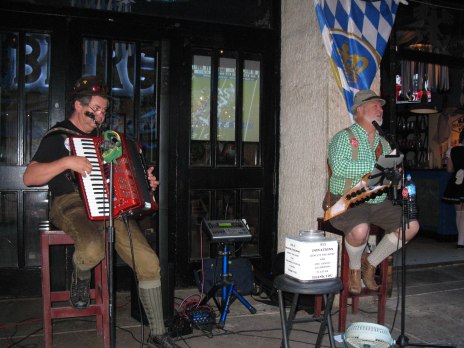 Sign on bucket: “All Donations Benefit the Home for One-armed Accordion Players”

We climbed back up the stairs to the hot pavement, returned to the bike and attempted to find our way back to the campground. We needed a little help from a traffic cop who allowed us to make a U-turn after he told us we were going in the wrong direction. Following his directions we found a much easier route back than the one we’d taken to get there, one that we would use again the next day.

After breakfast we returned to the same parking lot and made our way back to the River Walk. This time we took the hour long boat cruise through all the branches of the river while our captain told us of the history of the building of the River Walk, its main purpose being to prevent flooding. Over time the building of a multitude of restaurants, a shopping plaza, convention centre and two towering hotels has turned it into a major tourist attraction. We spent the rest of the day enjoying the atmosphere, listening to the music being played on the terrace of the plaza, and ending our visit with a fine dinner at The County Line BBQ, after waiting in line for twenty minutes. We were disappointed to see that not all of the lights along the walk had been turned on, but it was a lovely evening just the same. 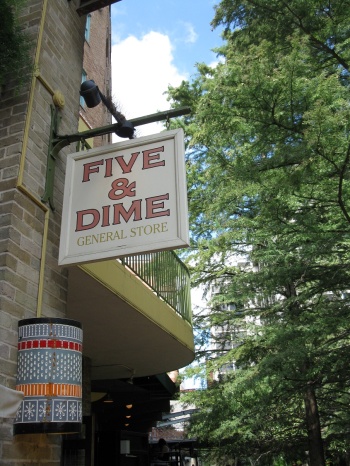 A good place to purchase t-shirts and other souvenirs

The birds found a good place to eat, but we couldn’t get a seat here.

The next morning we were on our way again.