With our days here dwindling quickly, we went on one last adventure before starting the task of sorting and packing to get ready for our trip back to Ontario. Saturday morning we packed a lunch, and struck out in the car, top down, towards Oracle and Biosphere 2.

An hour later, we stopped for a stretch at a little park that displayed a memorial to Tom Mix, a famous movie cowboy who died in a car accident at the spot in 1940, too long ago for me to know anything about him, but his interesting story was posted. 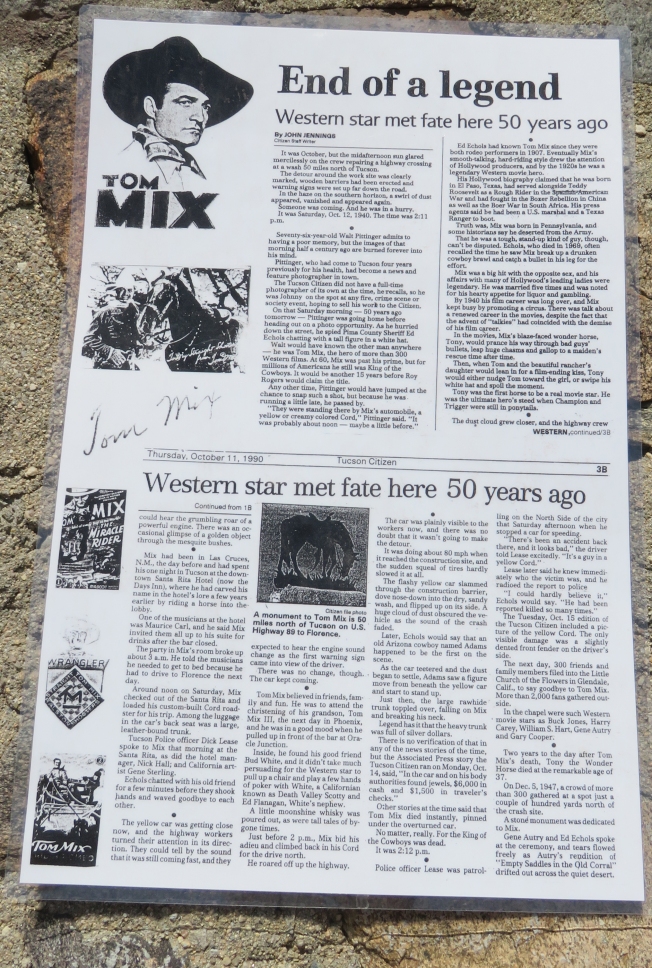 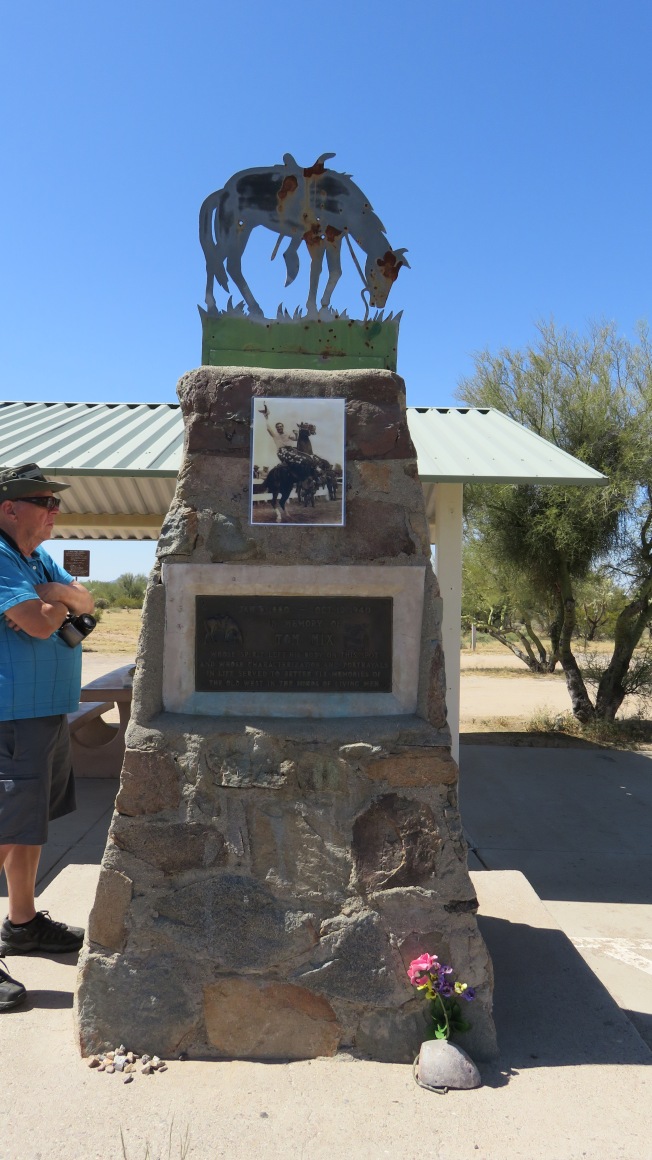 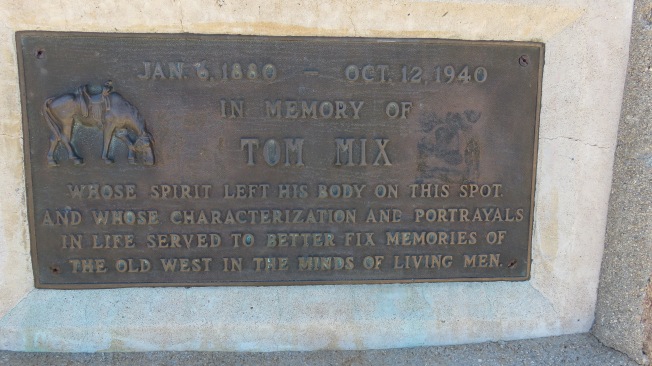 It was lunch time when we arrived at Biosphere 2, so we sat outside on one of the stone benches and enjoyed our lunch while soaking up the sunny atmosphere. Then we went inside to wait for the tour to begin.

Biosphere 2 contains 5 biomes, including a 900,000-gallon salt water ocean, a rain forest, a desert, agricultural areas and a human habitat, all within the 7,200,000-cubic-foot sealed glass and space-frame structure. 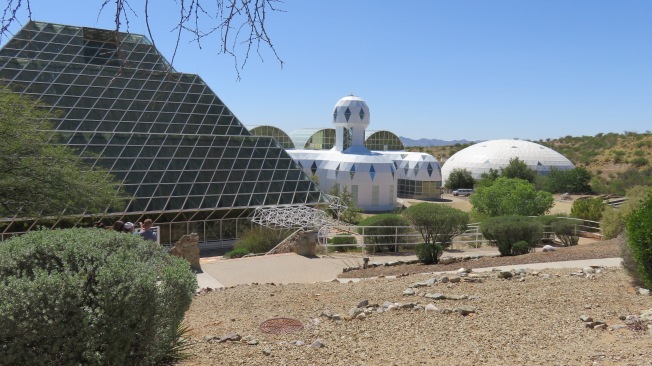 Biosphere 2 was a Space Biospheres Venture project that began in 1984 with the purchase of the property near Oracle Arizona that had previously been the site of a conference centre for Motorola, and then the University of Arizona. Two years later an iconic facility was constructed with $150 million in funding from Texas oil magnate Edward Bass. It was designed as an airtight replica of Earth’s environment (Biosphere 1).

Some of the early designers and managers were interested in space travel and the possibility of colonizing the Moon or Mars.  With the hope of learning what problems would arise from living in a closed system, in 1991 a colony of eight people were sealed inside Biosphere 2 for two years. Six months later another crew of seven entered Biosphere 2, but after a number of physical and social problems developed these experiments were suspended in 1994.

In the years following, the facility was managed by Decisions Investment Corporation and Columbia University until 2007 when CDO Ranching and Development bought it. The University of Arizona assumed management, and was then gifted the facility in 2011. It has been a state-of-the art research laboratory for students of science ever since, with tourism providing some extra funding.

After a five-minute video that highlighted some of the things we would see, our tour began. I can’t remember the tour guide’s name because he was not a memorable soul and brought no life to the tour. It seemed like he didn’t have enough to tell us and was always checking his watch and then saying, “So I’ll give you a minute or two to stand here and look around” as if he was killing time. That was disappointing.

We saw banana and eucalyptus trees in the rainforest, and a little experiment in progress that some school children had set up. It was a several-tiered vegetable garden that was being nourished with the run-off water from a Koi fish pond at the top level. We walked through the mangrove marsh and the desert. 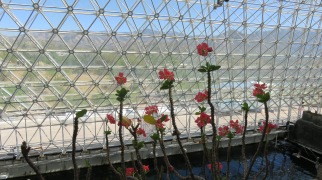 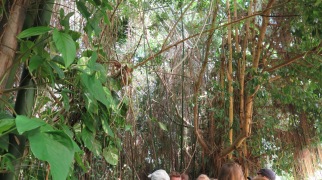 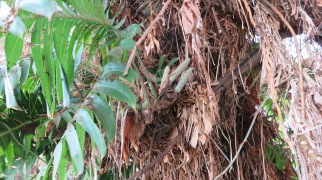 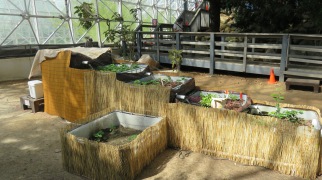 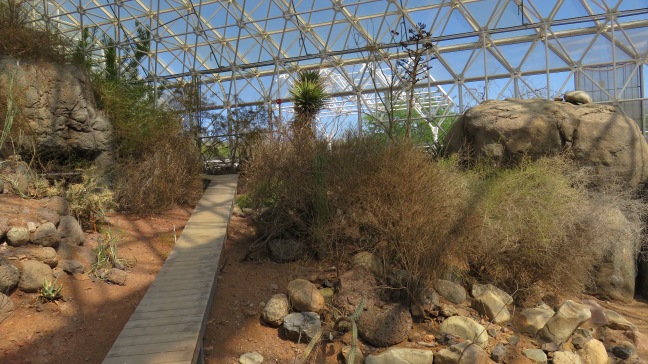 There are two “lungs”, white domes that are variable air-volume control devices. Our guide took us through a tunnel, into the South Lung and explained a little bit about how it works. 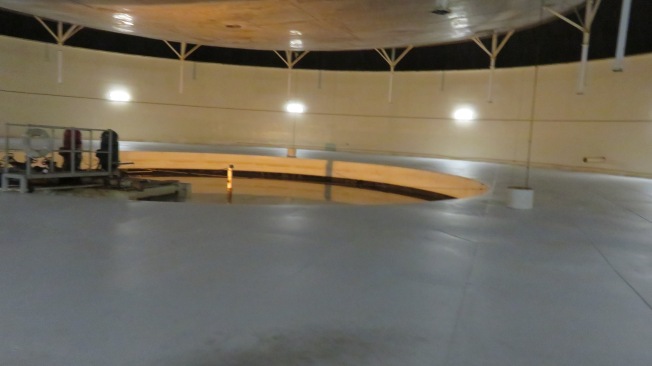 I think with a more enthusiastic guide, the hour and a half long tour would have been very interesting, but as it was, we were glad when it was over.

Then we were allowed to do self-guided tours of the Ocean from below, through a windowed tunnel, but some sections were under repair or construction, so there really wasn’t much to see. We decided to skip the self-guided tour of the Upper Habitat, where the crews had lived in 1991 to 1994, since we’d been given views of it in the video, and we were ready to continue on to Globe for dinner.

Although the history of the Biosphere 2 is interesting, I felt that today it would be far more enticing to spend some time there as a science student or researcher, living in one of the adobe apartments and making use of the facility for experiments and further knowledge. Summer programs are offered to young students as well.

To learn more about Biosphere2 check out these websites:

8 thoughts on “One Last Adventure in Arizona – Biosphere2”