I woke up this morning with a couple of ideas for blogs and that was to be my priority today, right after we made a quick trip to Walmart or Staples to pick up the iPad 2 that was on sale during Canada’s version of Black Friday.

So off we went at about 9:45 am, only to find that both places were sold out! It was interesting that the one at Staples was actually $5.00 cheaper than Walmart, if they had it. They could have ordered it in, but then Jim was thinking he might like to also buy an iMac computer to do his videos. He’d been using his daughter’s yesterday and was impressed. For the first time all week we had nothing on our calendar so decided to make a trip to the nearest Apple Store, at Yorkdale Mall in Greater Toronto. Sounded easy, right?

The earlier rain stopped and the sun came out. Traffic wasn’t bad. We were at the mall parking lot by 11:45. Forty-five minutes later we finally found a parking spot – in the new underground parking lot. It was offering four hours free! Great! There were no numbers on the posts, but when we found a door nearby we made note of the number on it, and climbed three sets of stairs that took us … back outside!  A walk around a corner led us to a mall entrance, not too far from the store we were seeking.  However, there was a line up at the Apple Store, as there was at many stores. We waited. By the time we got in we’d decided that it would be worth the extra $90 to upgrade to the new iPad rather than the second generation one. We priced the iMacs. The latest version hasn’t come out yet. Jim wasn’t sure, so we got the iPad (they had plenty in stock), and then found our way to the food court. Finding a table in there was as bad as finding a parking space, and there was a wait for our food, but we finally got finished and did a little more looking around the stores.  Jim decided he’d buy the iMac that was in stock.

“Did you want someone to carry it to the car for you?” the salesman asked.  It didn’t seem so heavy so we declined and headed off to find our way back to our parking spot. We missed seeing the escalator so went outside the way we’d gone in and found the door to the stairs we’d taken. It was locked! By this time Jim was finding the computer getting heavier. Back into the mall we did find an elevator that took us right down to the parking level we needed. But, we got off in a completely different area than where we’d left the garage. We looked around.  Jim thought he knew where the car was.  I was carrying the computer by then.  “You stay here and I’ll go get the car,” he said.

I waited, and waited. Many other cars were heading towards the exit, apparently the drivers having had no problem locating them.  Jim appeared on foot, waved, and kept walking in the other direction. Twice more I saw him on foot before my familiar car pulled around the corner and stopped in front of me.

It was five o’clock when we got home.  That was the longest trip to Walmart that I’ve ever taken! Thank goodness we didn’t come away empty handed. 🙂 Jim couldn’t wait to get his new toy out of the box. 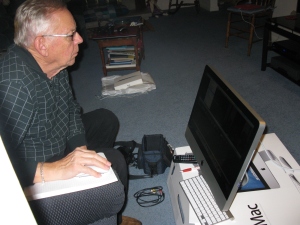