We are awakened in the morning by a very chatty bird somewhere in the tree above the RV. Otherwise, all is quiet at the Apache Family Campground.  I’ve yet to discover the bird, but he makes a pleasant alarm clock. The sun flickers through the blinds. Ahh, life is good.

We arrived here at about 4:30 pm on Thursday.  Other than the witnessing of some amazing driving skills by a tractor trailer driver who had somehow lost control of his rig but managed to keep it completely upright as it careened through the grassy medium between the north and south bound lanes of I95, the drive on Wednesday and Thursday was uneventful and rather tiring, despite mostly sunny weather. 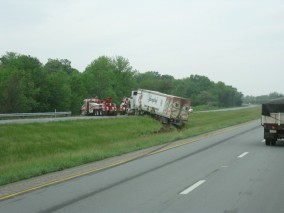 It did pour rain on Wednesday night while we holed up between semis parked at a truck stop. Poor sleep and frustrated attempts at getting connected to the internet with our newly purchased Verizon Wireless Wifi card (you may recall the problems we had with that on our adventure to Sturgis) caused us both to be a little grumpy, creating some tension.

Fortunately Thursday was sunny and we made good time, so took a couple of breaks.  We HAD to take Exit 97 to check out the JR Bargain Shop that had been bill boarded along the highway for the last twenty miles or more.  It’s huge, but there wasn’t much there that we couldn’t live without. The next exit took us to a very large outlet mall. Can you believe I left empty-handed? Jim picked himself up three badly-needed new shirts.

The evening was spent setting up, having dinner and making a trip to Walmart for a few necessities, and one not-so necessary item, but a great buy – a 22” TV for the RV. Hey, cable is included in the price of the campsite! Yes, I carried it between us on the bike!

After catching up on emails and business on Friday morning, we headed into town. The sun was warm; bikes were just beginning to arrive; things were getting set up for Bike Week.  We pulled into Barefoot Landing and began a walk around.  It’s an area of boutique style shops and a number of restaurants and a theatre. I treated myself to a new Tilly hat, and we had a bowl of clam chowder at Joe’s Crab House. On the boardwalk, a chatty sales lady representing Wyndham properties convinced us to take advantage of some free treats in exchange for spending a couple of hours listening to a presentation for time-shares.  Not in the market for luxury traveling at the moment, we never-the-less decided to take the offer. Who knows, someday we might tire of “roughing it” and knowledge is always a good thing, right?

It turned out to be well worth the three hours that it took for the talk and the tour of a grand suite on one of the Wyndham properties.  In exchange, we enjoyed a wonderful sea food dinner at The Flying Fish Market and Grill, 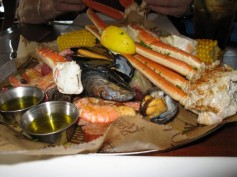 followed by a two hour variety show called simply ONE, at the Alabama Theatre. The show was spectacular, with musical numbers from a variety of genres – country, rock and roll, Motown, a couple of show tunes, and tributes to both Frank Sinatra and Michael Jackson. The amazing costumes, lighting and special effects were icing on the cake. During the many scene and costume changes, comedian Grant Turner (a.ka. Ricky Mokel) had us laughing uncontrollably with his “stage hand” monologues.

Between dinner and theatre we took a stroll across the parking lot to photograph The Blues House, a popular bar and entertainment venue named for the Blues Brothers. I wonder what it 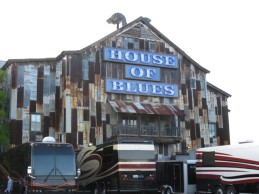 We haven’t yet decided what we’ll do today. We could walk down to the beach and pier (we should have brought fishing rods) or get back on the bike to take in more of the sights and sounds of downtown. I’ll let you know tomorrow what we decided.