We’ve been in British Columbia for over a week now. Our first stop was Golden, where we went into the Visitor’s Centre to get maps and take advantage of the free Wi-Fi. While we were sitting in the corner seats, a rather large beetle-like bug landed on my iPad. I instinctively flicked it off and stepped on it. When the area filled with a horrible smell, I knew it was a Stink Bug, also known as a Cedar Bug, the woman at the desk told us. We found a restaurant and had some lunch before moving on.

A couple of hours later we saw a sign for Canyon Hot Springs that offered RV camping. That sounded like a marvelous idea as the weather had turned cool and wet! Fortunately, they had plenty of room since they were closing for the season in just a few more days. 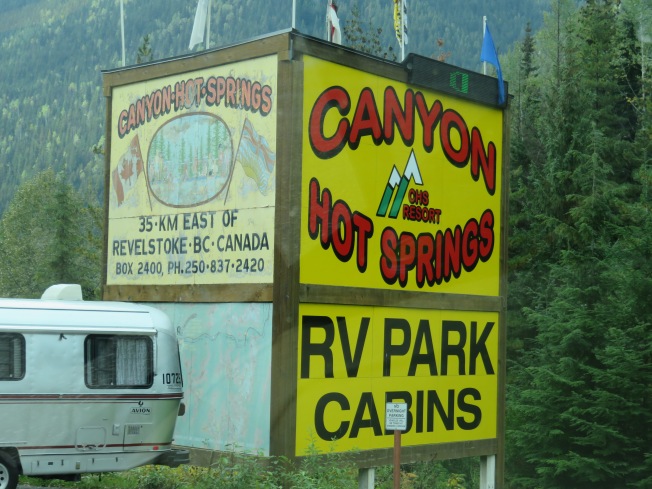 While Jim hooked up the electricity and water, I thought I’d get something out of the freezer to thaw for dinner, but it turned out to be unnecessary – everything was thawed! For reasons that I won’t go into, the fridge had been off all day (or longer), and because there wasn’t much left in the freezer, it didn’t stay frozen. I closed the door, retrieved our swim suits from the bedroom drawer, and thought about what to do. When Jim came in I asked him to get the electric cooler from the outside bin and I put the half-bag of shrimp, four pieces of salmon, and a couple of pork chops into that. The fridge was now back on, but I didn’t want this meat to re-freeze and there wasn’t room for it in the fridge. I knew I’d be cooking more than I’d planned that night, but first things first. It was time to soak in the Hot Springs! Actually, it was two good sized swimming pools that were fed from the hot springs, one much hotter than the other. We acclimatized in the cooler one, and then moved to the other.

While we soaked, we chatted with a couple from California, Robin and Mike, who were enjoying a tour of Canada in a pop-up trailer, but were disappointed in the cool and rainy weather we’d been having the past week. They were glad to get warm in the pool. We learned that they were parked quite near to us, and that they had been camped in Jasper Whistler Campsite at the same time we were. In fact, they had had the privilege of watching the Elk family from their doorstep every day that they were there! I’m hoping Robin will send me a couple of the great pictures that she got. When we’d started to shrivel from the heat, we returned to the motor home and I began to cook. Knowing that there would be much more than we could eat ourselves, and that we would soon be sharing meals with my daughter and her family, we invited Robin and Mike to join us for dinner. I cooked the shrimp in some garlic butter, before adding the fresh stir-fry vegetables I’d bought for that reason. I dumped in the green beans and red peppers that had thawed in the freezer, and cooked some more quinoa to add to the leftover I’d planned to use for ourselves that night. I put the salmon pieces into the oven with a maple walnut coating, and while that cooked we shared a bottle of wine and good conversation with Robin and Mike. It turned out to be a wonderful evening after all, despite the pouring rain.

We hardly noticed the rumble of the trains on the nearby track (that seems to be a common denominator at campsites) that night. We slept well. The next morning we said our goodbyes to Robin and Mike before continuing toward Kaslo.

We stopped in Revelstoke for lunch at a friendly café in the downtown, then fueled the motor home at a gas station, and filled the propane tank a few blocks away. At the gas station I sat inside while Jim pumped the gas, on the driver’s side of the coach. At one point, I recall, I felt some rocking and a little bang. I thought it was the sound of Jim opening and closing one of the outside bins, so didn’t look out. Jim recalls feeling the rocking, but figured I was walking around inside. When he was done filling the tank, he noticed that the truck, with a trailer, that was using the pump on the other side of us, was so close to our coach that Jim had to turn sideways to squeeze past it. When he got out to get the propane ten minutes later, he noticed some major cracks in the fiberglass of the back passenger-side corner of the coach, and a missing light cover. It would appear that the driver of that truck had hit us with his trailer, backed up to re-position , and said nothing!

Too late to do anything about it, we carried on. We crossed Arrow Lake on Shelter Bay Ferry to Galena and continued along Hwy 23 to Nakusp and then back onto Hwy. 6. 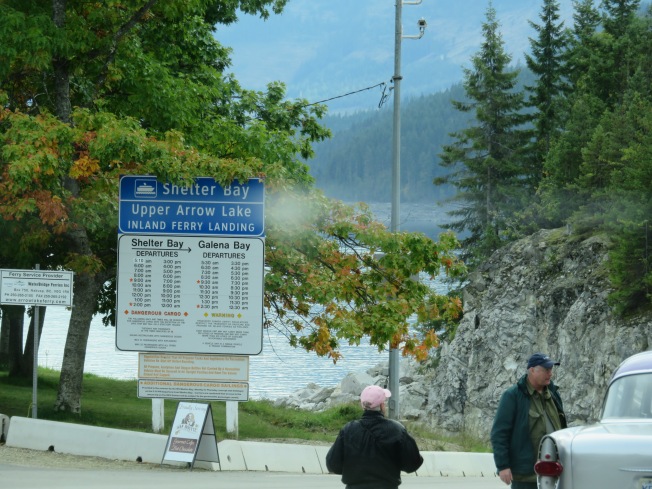 On our way out of Nakusp we saw a well-dressed hitch-hiker on the side of the road. We did something we’d never done before. We stopped to offer her a ride, and were glad that we did. Petra was a lovely young woman from Austria who was making her way around parts of Canada before returning home to finish her thesis. That day she was hoping to reach Nelson. Kaslo was on the way. While we drove we learned a bit about Austria, and told her some things about Canada. She’d never been in a motor home before, and she was grateful for the ride because she’d been standing on the road for over an hour. It was starting to get dark when we left her on a corner in Kaslo, with the promise that if she didn’t get a ride quickly, she’d find us in the campsite and accept our offer of the hide-a-bed for the night. We didn’t see her again, so have to assume that she made it safely to Nelson.

That was the start of a week in Kaslo with family and friends.