After our stroll around the Camp Washington property, and chatting with our RV neighbours, Lisa and Vicky, and the maintenance guy, it was 10:30 before we left to go back to the Caverns. We spent a couple of hours taking our time and taking pictures on the 1¼ mile walk down to the bottom, doing the self-guided tour. Trying to capture the beauty was difficult without more sophisticated equipment, but we did our best. It’s amazing!

By the time we reached the bottom it was well past lunch time and we’d worked up good appetites, so we took advantage of the sandwiches and drinks that could be purchased in the only area where food was permitted. We wanted to continue touring the 8.2 acre “big room” but decided, since it would take another hour and a half to explore its perimeter, we would have to return another time. We were anxious to get to El Paso so we could touch base with the glass company and the tow truck driver and get the windshield repaired.

When we got back down to the highway and saw a sign telling us that there were no services for the next 138 miles, Jim pulled into the only gas station around to top up our tank. That shouldn’t have taken long, but a while earlier there had been a gas spill there and the pumps had been turned off. We had to wait until the manager returned to reset them!

At last we were headed back south at 2:30 pm. The scenery was boring with nothing but  dry, empty fields for miles and miles. The sun shone bright and hot through the front windows. 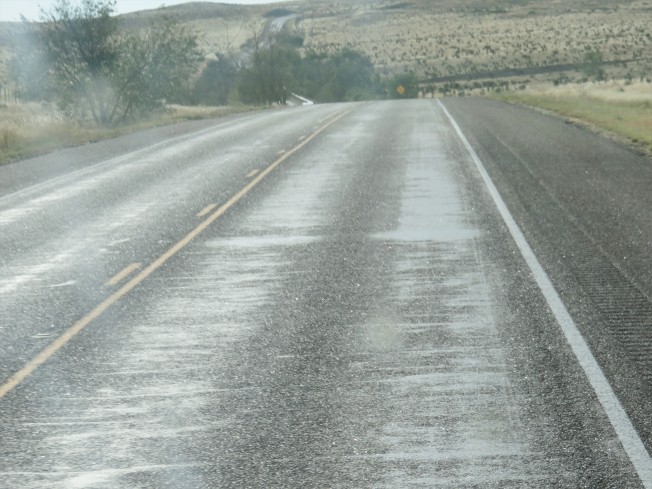 The battery on our Bluetooth speaker had died  so we could listen to no music – no radio stations, no cell service, just desolation. By the time we arrived at Mission RV Park in El Paso at 5:00 local time, we were both out of sorts. The sun reflecting on the windshield cracks (which had spread further) made it difficult for Jim to see where he was going to find our spot. I had a major tension headache. When Jim checked in he asked how far it was to the nearest restaurant. Five miles! Across the highways! But they did have take-out menus for a Chinese Restaurant and a Pizza House. After a heated discussion we settled on an order from the Chinese Restaurant. Jim tried to order from his phone; it wouldn’t work. Before that he’d tried to put the slide out; it didn’t work. Hence the “heated discussion” over what to eat for dinner! I called in the order. The menu was very confusing and we ended up with enough food to last us for three meals, which was a good thing, since we were miles away from a grocery store and had no idea how long we’d be here.

The next day Jim called the glass place (Safelite), only to be told that none of their suppliers had our windshield and there was nothing they could do for us. We wondered if that meant the motor home would be written off because the windshield couldn’t be replaced! One reason we chose this RV Park is because it has an RV Repair Shop and the windshield wiper also needed to be replaced. Jim went in to see them but they didn’t have a wiper for us and made no offer to try to track one down. They did, however, have the name of another glass place that might help us. Jim made the call and got good/bad news; they could get it in, but it would take 5 to 7 days! He called the glass place back home that had previously replaced the passenger side glass. They could have one shipped to us in about the same length of time. Jim called Mark Moisa at Quality Towing in Carlsbad to tell him what was happening, since we had not heard anything from him. He didn’t answer his phone, but returned the call right away. He asked Jim to send him the information for the local glass installer that we had, saying he’d call him. Then we waited for his approval to order the glass, because he was going to pay for it. And we waited. Jim called again in the afternoon and was told by whoever answered the phone that Mark was in a meeting and would call back in about an hour. He didn’t. Jim called the glass fellow and learned that Mark had called him to get the quote, saying he’d call him back. He didn’t. Later that evening, Jim blocked his cell phone number and called Mark again. When he answered and found out who it was he gave an incredulous story about being at an accident scene that involved his driver being hit and there were police cars, and ambulances and he had been talking to the police for three hours and had to go talk to them again, but he would take care of us as he’d promised. He’d call back “in a few minutes.” That was the last we heard from him.

Jim tried once more on Friday, but was again told that he was in a meeting. We gave up and called our insurance company with the story. An adjuster called back for more details. Jim gave him a quote from the local glass company, and the one in Canada, but still the adjuster said he’d have to send out an appraiser, and then we’d need to get more quotes. He also wanted quotes for the other damage (windshield wiper, and few dings/cracks in the fiberglass). He said it would be two weeks before the windshield would be fixed or replaced! Jim told him that was unacceptable and reminded him of our circumstances and the extra expense of continuing to stay in this park. He relented, called the local glass company for the quote and then gave permission to order the windshield.  We have to pay the $300 deductible. The insurance company will go after Quality Towing for reimbursement. I hope they have better luck than we did.

Oh, Jim asked the adjuster if the motor home would have been written off had we not been able to find a replacement windshield. His response, “No we’d have a new one manufactured, but it could take up to six months.” Thank goodness we found one and it is now on its way to us! We are still here, waiting.

There have been a few positives since then. Jim figured out what was wrong with his phone, and was able to fix the slide out problem. I did some baking and made a pot of chili. I got caught up on my blog posting and laundry.

We have made a few friends that have made the waiting easier. On Wednesday night we shared drinks and conversation with a couple from New Zealand who were parked next door to us. Sadly, they left the next morning. Friday afternoon another couple came in on the other side of us. They were here for the weekend to watch their son play hockey. They took us with them to the Friday night game (about which I’ve already posted). We stayed mostly in the park on Saturday, venturing only a couple of miles on foot up to the highway interchange where we found a full service center that carried some groceries and a Subway, if we got really in need of food. We bought some bananas and a bottle of wine to carry back. We played some pickleball on the vacant tennis court.

Thanks to Nawton and Peggie, Carol and John for taking our minds off our troubles for a bit.

A friend of Jim who lives in Connecticut happens to have a friend, Shawn, in El Paso. He suggested Jim give him a call. On Sunday Shawn took us out for a tour of the city, lunch, and then to stock up on groceries. He’s recently retired and his wife is away for the week so he was happy to have company and something to do. Yesterday he took us sightseeing again, and drove us around in search of a wiper, to no avail. Today he’d planned to take us downtown to some of the museums, but when Jim showed him how he thought he could repair the wiper if he could find someone to do a tiny bit of welding for him, Shawn thought of places he could take us. Each place was unable to help. We even went to the Ford Dealership to inquire about ordering a new wiper. They had nothing in their catalogue. Then Shawn came up with the idea to check with a former colleague of his who now works for a job training center. What a good call! His friend got one of the students to do the welding.

An enormous thank you goes out to Shawn, who has kept us from going insane. Maybe tomorrow we’ll finally get to tour downtown. 🙂

Now we have everything taken care of except the windshield. We’re hoping it will be done by the end of the week and then we’ll be on a direct route to Mesa, Arizona.

Life is much better now, thanks to these generous people.