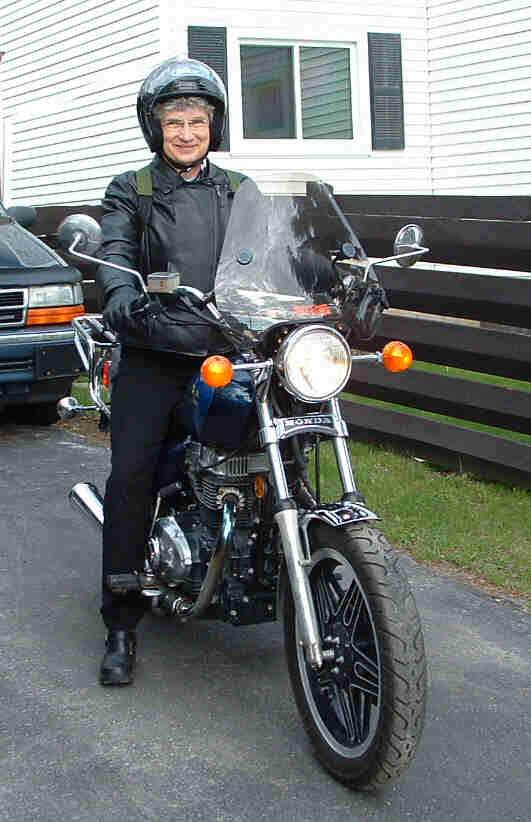 My first experience on a motorcycle was at age 46. I had never before had the opportunity, and indeed would never have even considered the possibility a few years earlier.  But my life had been turned upside down by divorce and I was picking up the pieces, learning to experience life with more enthusiasm.  When my new partner, Leo, asked if I’d like to go for a ride on his bike, I jumped at the chance.  To my surprise, I loved it!

Four years later I was standing next to a much smaller bike, on a military base parking lot with twenty other people, all there to complete the course that would give us a licence to ride.  Ages and genders varied.  I was pleasantly surprised to discover that the majority were closer to my age, rather than much younger.  My presence was partly because my partner’s health was failing and I wanted to learn how to handle the bike in an emergency; but it was the encouragement from my daughter, Ann, that had brought the musings to reality.

“Don’t you remember the day I got a ride home from school on the back of a motorcycle?  You forbid me to ride on a motorbike again as long I lived under your roof,” she reminded me, when she heard that I now enjoyed riding myself.

“I said that?” It’s amazing how memory fails with age!

For my 50th birthday present she gave me the chance to take the Beginner Motorcycle Course.  How could I refuse? How difficult could it be?  Having ridden a bicycle since I was a child I knew how to balance on two wheels, and I had acquired the skill of shifting gears when I learned to drive a standard car.

So there I was, a middle-aged woman with grown children, standing on the threshold of another new adventure.   After three hours of in-class instruction the night before, we had been issued the 150 cc bikes that would be ours for the rest of the weekend.

The first step was to take it off the kickstand.  I straddled my petite 5’6” frame over the saddle, put my weight on my right foot, and pushed my left foot against the stand.  Before I could bat an eye the bike was on its side, and I was scurrying to get out of its way!  I wasn’t off to a very good start.  With the help of a fellow classmate, I quickly got the bike back up on its wheels, ready for the next assignment.  We spent most of the morning riding across the parking lot, powered only by the pushing efforts of our assigned partners.  Before we could hear the engines humming we had to learn how to balance, steer, and brake.  The autumn sun was warm, making me sweat in my black leather jacket and gauntlets, and a full-face helmet. My mouth was dry.  Was it caused by the heat, or by fear?

By the lunch break I was confident enough to move on to the next stage, or so I thought.

When we climbed back onto the bikes, we were told to follow the instructor across the street to a larger lot. Once there, we would be playing a game of follow the leader, turning along the laid out paths.  I started my bike up, pulled in the clutch, kicked it into first gear, and gave the throttle a turn.  The bike leaped forward, then stopped.  I tried again. That time I kept it going.  I followed the crowd across the street and around the perimeter of the lot.  The bike sped up, then slowed down, up and down.  I was not feeling as comfortable with this as I had expected.

After further instructions we started off again, but this time we had to follow smaller circles and figure eights.  I was still having difficulty controlling the throttle and now it was making me really nervous.  As we headed into the first circle I gripped the handles, pushing on the left and pulling on the right like we’d been instructed. Suddenly I found myself shooting far across the lot, my instructor calling to me to come back! When I finally relaxed my grip, I succeeded in slowing down and turned back to join the circle once more, but I was soon off in another direction.  Now it was getting really embarrassing. I struggled all afternoon.  Finally five o’clock came and we were dismissed for the day.  My instructors told me that if I arrived 15 or 20 minutes early the next morning, one of them would work with me. At that point I didn’t think I would ever return.   When I got home, exhausted, I just wanted to go to bed.  I told Leo that I didn’t want to go back, but he reminded me that, because it had been a gift, I should at least complete the course.  I knew he was right, but how could I face another day of humiliation?

The next morning I dragged myself out of bed to arrive a little earlier than the others.  My instructor gave me tips on how to better control my bike, and then led me around the track and through the figure eights.  Maybe the good night’s sleep had renewed my confidence, I don’t know, but we were both relieved that, by the time the rest of the class arrived, I was managing the bike on my own within the paths set out. We spent the rest of the morning practicing the maneuvers, learning how to make quick turns to avoid sudden challenges (the challenge being an instructor standing directly in our path and giving us a signal as to which way to turn at the very last minute!), and how to stop quickly.  By the time we were put through the test in the afternoon, I was able to keep up.  At the end of the day, when the test results were given out, I held my breath. My worries were unfounded.  I wasn’t at the top of the class, but I had finished with a pass, and that was all I needed for now.  Whether or not I would ride a bike again was something I wasn’t going to think about until spring.

Today I have a bike of my own, but I have to admit that you’ll find me more often riding on the back of my partner’s bike where I can relax and enjoy the scenery.