We drove for three hours to Niagara-on-the-Lake to see Alice in Wonderland at the Shaw Festival. We’d never been there before and Alice looked like a fun production. We almost didn’t go because we’re saving our money for our next big adventure – a tour to China – but we got in on a seat sale and off we went.

For some reason our GPS needs to be always plugged in and the connection has a problem so it kept shutting off and reloading.  Finally I found Google Maps on my new Samsung Galaxy Grand Prime and was pleased at how easy it was to follow. We arrived at the theatre, found a parking spot on the street only a short distance from the door, and still had time to purchase a large chicken Caesar salad at the food bar to share before curtain time.

The theatre is well laid out, meaning there were no bad seats in the house. The production was as colourful as expected, including gorgeous costumes, and brilliant special effects. 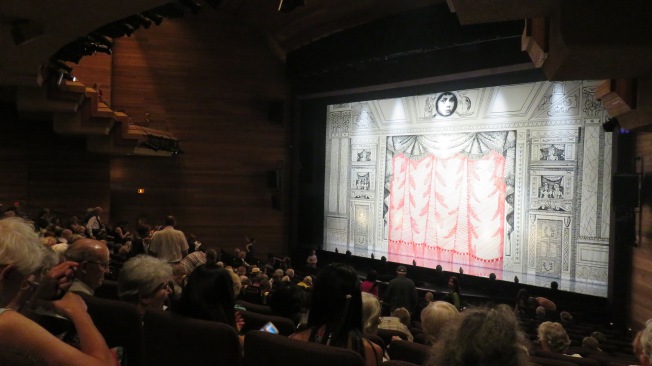 At intermission we enjoyed a cold drink on the patio and toured the gardens. It was worth the trip, to that point. 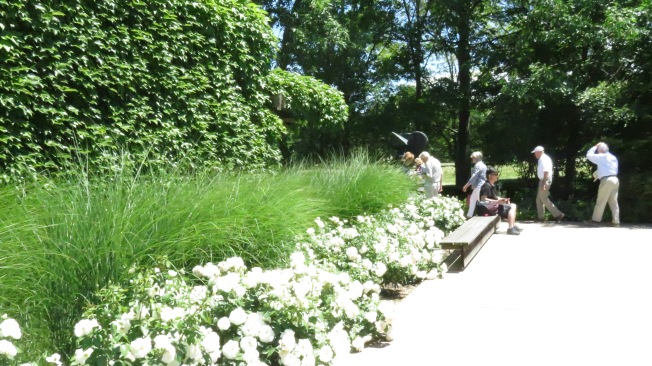 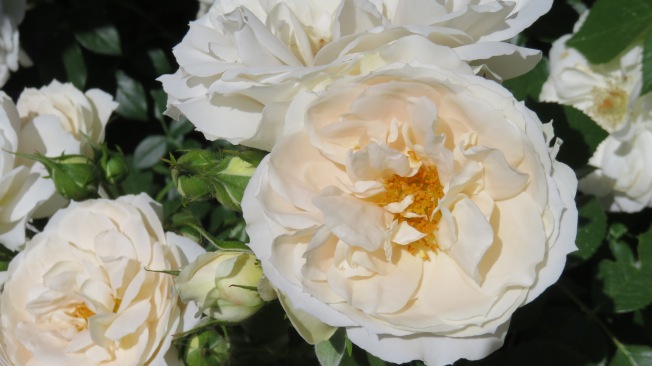 By the time it was over, two and a half hours later, the shared salad had left me yearning for something more. We drove down the main street and again were fortunate to find a perfect parking place. We wandered the street, taking pictures of the lovely old restored buildings, poking our heads into some of the unique shops and checking out menus at the many restaurants. 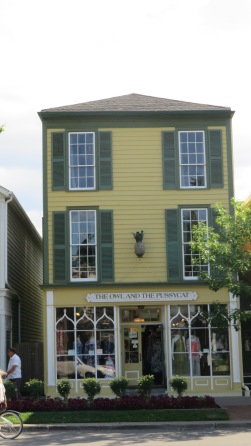 The prices seemed high, even for a tourist town, starting at about $25.00 a plate. We decided that we’d drive to our inexpensive hotel in Niagara Falls and find a restaurant there.

When we checked into the hotel, we were told that the $48 room didn’t include the $12.00 parking fee or the $3.99 tourist fee, but we had read about that on the website. We were impressed with this Super 8 hotel, which seemed to have recently been updated. Everything was clean and fresh. The room was large.

We were given coupons for a couple of attractions, and $15.00 off a meal at the iHop, just a few blocks down the street. Off we trotted, only to find that that particular iHop isn’t open for dinner during the week. We saw another one in the distance and started walking again. By this time I was feeling a little weak from hunger. When we opened the menu we discovered that the prices at this chain restaurant were only a couple of dollars less than what we would have paid for an exclusive fresh-made meal in downtown Niagara-on-the-Lake. None of the choices were very appealing. Jim chose the chicken fried steak dinner; I settled for a chicken and cheese quesadilla. The shell was a little too crispy, but the chicken was tender and flavourful. Jim had an iced tea; I had water. Total cost including tip, and minus the discount, $45.00!

In the morning we snared another discount coupon and headed back to the closer iHop for breakfast. Along the way we noticed a sign advertising a Breakfast Buffet for just $6.99, but we’d forgotten about the breakfast prices at iHop, and we had the discount coupon, so we carried on. It was 9:00 a.m. and there were very few people in the restaurant. That should have told us something.  We ordered coffee while we looked over the menu. Neither of us wanted pancakes or waffles, iHop specialties it seems.  We asked about just getting bacon and eggs and were told that they could do some substitutions. On one special menu a variety of fruit covered waffles were shown. Below them was a list that read, “Build your Own.” It looked like maybe these simple entrees of bacon/ham, eggs, hash browns and toast might come with the waffles, but our inquiry confirmed that they did not. The price for the bacon and egg plate, without the waffles was $18.99!  We decided to leave. We’d already poured our coffee, and added three milk to the very black liquid. Just a few sips were all our taste buds could handle, but we knew we were obligated to pay for it. When the waitress brought the bill, Jim’s jaw dropped –$9.28!

As we exited, Jim offered our coupon to one of the few other groups of people seated. They exclaimed, “Now we’ve got two!” I didn’t even hear a thank you.

We walked back to the $6.99 Breakfast Buffet at the AlMacs. The place was buzzing. We were shown to a booth not far from the buffet and there we found more variety than the iHop menu provided. We should have gone there to start, and we could have also enjoyed the dinner buffet the night before for only $12.99.

Back at our hotel we packed up to leave. When Jim went to the desk to settle the bill again his jaw dropped. The $48 had become $86 by the time all the little extra charges were added on.

So it turned out that what was expected to be a reasonably priced one-night get away was just a tad more than we’d budgeted for.

7 thoughts on “Things Aren’t Always What They Seem, A Niagara Get-a-Way”