Through email, we’d made plans to join more friends we’d met in Arizona for lunch. Jack and Marnie live in the Edmonton suburb of St. Albert, Alberta so we looked for a campsite near them. We found the Kinsmen RV Park to be perfect, but when we arrived late in the afternoon we were surprised to find the park looking very full. We hadn’t made a reservation, but it turned out that it wouldn’t have made any difference. It seemed that a big BMX Competition was happening that weekend, and camping spots had been booked for a year. The fellow in the office wasn’t happy to see us and was even reluctant to suggest any other options, but he finally gave us a few numbers to call. In the meantime, a couple who had also been turned away and were parked along the driveway waiting until they could go to the home of their friends, came over with some other suggestions. On the second call, we found Glowing Embers RV Park and Travel Centre, but it was in the opposite direction. We punched the coordinates into the GPS and took off again. Between construction detours and the GPS getting us somewhat confused, it was an hour later when we got settled in and called to confirm lunch plans with Jack and Marnie the next day.

When we opened the trailer to get the bike out in the morning, we discovered that one of the bumps on our journey had moved the bike so much that one back strap had come unhooked and the bike had tipped over so hard that the handle bar had punched a hole through the plywood wall and dented the outside aluminum. With the help of a passing park guest, we got the bike out over our folding ramp that, we discovered in the process, had become unhinged.

The rest of the day was better. We made our way to Jack and Marnie’s with ease and spent a few hours of good food and conversation and a few games of Crocinole with their grandson.

From there we went to the famous West Edmonton Mall for a look that took three hours and we didn’t even get to the second floor! For those who know nothing about this mall, be sure to check the website. It’s not a typical shopping mall, but also a huge indoor amusement park where you can swim in the wave pool, skate on the ice rink, or ride one of several roller coasters, just for a start. 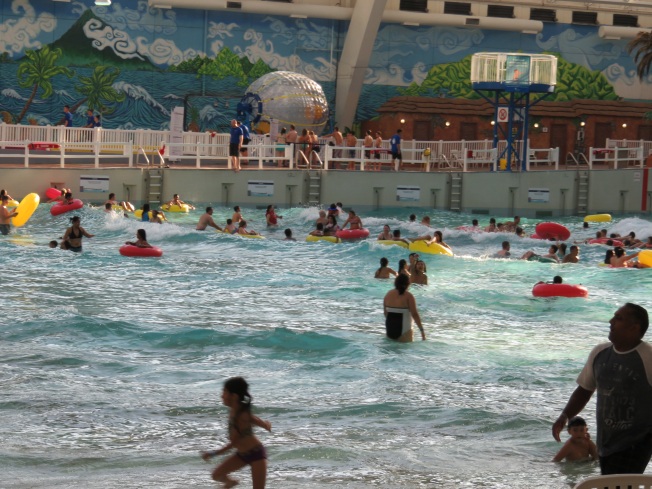 Lots of ways to play!

When we left there at 7:00 pm dark clouds had rolled in and winds were very high. It was difficult to keep the bike upright and in our own lane at times. We got a little lost again trying to get back to the campground too, but we managed to get the bike reinstalled in the trailer just before the rain began.

From Edmonton we continued on Hwy 16 to Jasper National Park, where we will be touring for a few days.  Watch for details in the next installment.