It’s been several months since I’ve sat down to write a blog. It’s been nearly as long since I’ve written anything except my daily journals. Even those seldom get written daily. What have I been up to?

Well, after we returned home from Arizona, we spent the first month in restless quandary, wanting only to get back into the motor home and return. I had it in my mind that it was time to sell the house and make a major downsizing to a condo, allowing us more time and cash to do more traveling. But it wasn’t until it came time to open the pool that Jim became convinced. Then there was lawn to cut and flower beds to weed, and on and on. He finally decided it was time.

So began a different kind of adventure. We struck out in search of the perfect condo, at the perfect price. That took a while and we had to compromise on location. We will leave the city for a village about a half hour away. There are many advantages to it, the biggest one being a large storage area. Lower taxes and lower heating costs sweetened the deal. The downside is that we are going from a living space of about 2700 square feet to one of 750 square feet.

But before we had to worry about that challenge, we had to get the house in shape to put it on the market. We were fortunate to have a good realtor living right across the street. She offered lots of great advice. We had to de-clutter, or at least hide things out of sight. She suggested that removing the remaining carpet in the living and dining rooms would be worth our time. We knew that we would find more hardwood flooring, but we were pleasantly surprised to find that it was in a state of having been freshly polished before the carpet was put over it. We only had to pull out the outside stripping and the two million staples. It was time well-spent.

look at that shine!

While we were at it, we replaced the vinyl flooring at two of the entrances. Painting of some outside doors and trim and some touch ups inside, and we were ready to show it.

Then we spent a month on an emotional roller coaster. There was a great deal of interest right away. No one who viewed it had anything negative to say about it. Many said they’d be back. Some did return, leaving the impression that they would be putting in an offer very shortly. We got excited. It didn’t happen.

We took a break, leaving it all in the good hands of our realtor, and took off to New Liskeard to the Bikers Reunion. I had been given the assignment to cover it for Canadian Biker Magazine, so that gave me something else to think about. It was a fun weekend and I will post more about it later. My story has just come out in the September issue of Canadian Biker, so look for it on the magazine stands.

This pooch enjoyed the Freedom Ride! 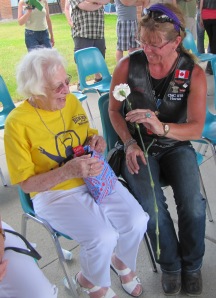 One of the Show & Shine Bikes, at the Bikers Reunion

I took another ten days off to visit my daughter, son-in-law and grand-kids, and a very good friend in BC. Before I left we all thought that an offer would come in. It didn’t. I made sure that I had access to a fax machine or scanner so that I could sign an acceptance of an offer while I was away. I needn’t have bothered.

More hours of sitting in the coffee shop while couples trouped through, either with agents or during Open Houses, only led to more euphoria followed by disappointment, until we quit letting ourselves believe “these will be the ones who will fall in love with it.” Finally, that couple arrived. A price was negotiated, dates were set, and papers were signed. Then we waited for conditions to be met. Time was of the essence because our buyer works in the Yukon and was only in town for a few more days before he had to return to work for another three weeks.

The weather had been hot and dry, but the night before the home inspection was to take place the skies opened and the rain poured down until late the next morning. The inspection was set for 8:30 a.m. As I wiped the kitchen counter at 8:10 a.m. I felt water splash onto my hand. It was coming from the ceiling! There was nothing we could do but call our realtor, and place a bowl under the drip. The buyer’s realtor said, “We’ll work something out.” So off we went to contemplate all of the possible scenarios, both good and bad. We did work it out. By the time we met with the realtors that night we had two estimates to present, for replacing the roof. After the inspection we had to call in the air conditioning man to tell us why there was another puddle of water on the floor beside the furnace. The inspector had determined that it was coming from the air conditioner. Fortunately that turned out to be nothing more than a blocked hose and was quickly fixed. The buyer’s realtor presented him with the reports that night, and through texting, an agreement was reached. We waited all evening and the next morning to hear if he’d signed off on the rest of the conditions. But when we hadn’t heard before we knew he would have left for the Yukon, our hearts sank again. Excitement captured us later that day when our realtor arrived at our door with “Sold” stickers to put on the “For Sale” sign.

Look at those grins.

Since then we’ve been busily culling. Bags of unneeded clothing have been taken to the Diabetes clothing bins (since we’ll be spending our winters in Arizona, we don’t need nearly as many); trips have been made to electronic recycling sites, and hazardous waste sites (no need for all that leftover paint!). Then, there was the attempt to find a buyer for some beautiful antique furniture that I have. Some of it has been in my family for over one hundred years, but there is no family member who wants it now, at least not badly enough to pay for shipping it across the country. I dealt with antique dealers who would offer only a third of what they’d sell for. I let my favourite piece go and wept. I’m still looking to sell the rest.

Two weeks were spent sorting through things in preparation for a giant yard sale, which we held for two days during Labour Day Weekend. We had much more success with that, taking in more for all the odds and ends of used things than I could get for the antique furniture. Still we took a trailer full of the remains to a local charity, and will make another trip in the next few days. Yesterday the roof was done, just in time for the buyer’s final inspection. That’s a relief. It’s raining again tonight.

The light at the end of the tunnel is getting closer. In ten days we take possession of the condo. We’ll have two weeks to paint and put up shelves and get moved. Two weeks after that, we will be back on the road again, taking a longer route to Arizona and another adventure.

5 thoughts on “Different Kind of Adventure”