At 10:00 am yesterday morning, fourteen motorcycles carrying twenty people set off from Mesa Regal toward the open road.  Jim and I were among them, having just hooked up with a group of regular riders. Most of the bikes were Harleys, but another Suzuki and a Honda were part of our minority. That didn’t seem to matter.

Pat led us out Hwy 60 and then south towards Florence, where we made a pit stop at the River Bottom Grill, and had a bit of time to get to know a few people better. It turned out that Pat and Catherine are from another Arizona city just north of here – Prescott. I told her that I’d lived a good portion of my life in the community of Prescott also — Prescott, Ontario that is. We chuckled over our different pronunciations of the word. 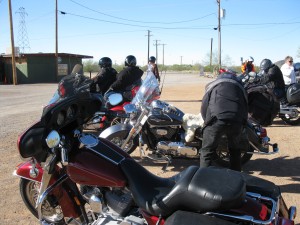 From there we turned west onto Hwy 287 and then south on Hwy 87 through Coolidge. The day was warm and sunny, although a haze of sand could be seen in the distance at the base of the mountains.

In a couple of spots the winds got really strong, hampering my efforts to take pictures. We passed fields where cotton had been harvested and clumps that had escaped lay on the ground in a rectangle marking where the bales had sat. I would have liked to pick up a handful.

We continued south until we hit Hwy10 and rode north-west for a few more miles until we reached our destination – Eloy, home of Sky Dive Arizona. No, none of us planned on jumping, but after an excellent lunch in the Bent Prop Saloon & Cookery, we sat outside to watch plane-load after plane-load of braver souls silently and skillfully drift to the ground with their colourful parachutes above them.

Look closely. See the man below the tail? 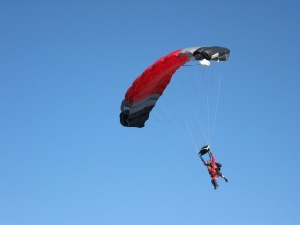 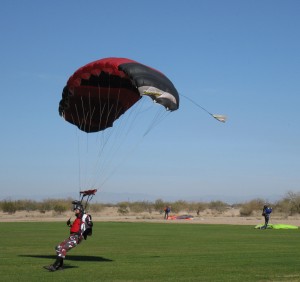 The ride home was by a more direct route, and, except for a ten minute delay in a construction zone, much faster. There was some confusion when Pat pulled into a parking lot and we were waved on to follow the next bike in line. We lost a few more along the way, so never got to say thanks for the ride to anyone but Dan. We enjoyed it.

2 thoughts on “A Beautiful Day to Ride”