What do a Singer, a Keyboarder, a playwright, a painter, life-time volunteers, folk singers and a Professor of English Literature, all have in common? They all hail from Peterborough, Ontario and yesterday morning they were all inducted into the Peterborough Pathway of Fame for the contributions they’ve made to their community.

The Peterborough Pathway of Fame had its first Induction Ceremony on July 18th, 1998 in Del Crary Park, after numerous years of meetings and brain-storming among several individuals who felt there was a need to recognize the area’s abundant wealth of talented, community-minded people who have enriched Peterborough and area. Inductees are first nominated by a member of the general public, a friend or a family member. A three member Selection Committee spends many hours perusing the application forms and letters received to eventually make the decision as to who will be accepted. Inductees are not only honoured at the ceremony, but they are featured in the Footprints of Life publication, which is distributed to attendees, and a stone bearing their name and category is placed along the Pathway of Fame, in Del Crary Park. With this latest batch of inductees,  there are now 204 stones on the Pathway.

We had the privilege of being invited to the 15th Pathway of Fame Dedication and Induction Ceremony, held at the Showplace Performance Centre. The invitation was given to family members of past recipients, and Jim’s dad, Ernie Victor, received that honour, posthumously in 2001 for his contributions to the Peterborough Entertainment Scene for many years. 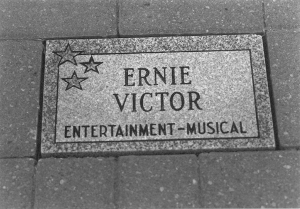 A stone on the Pathway of Fame

It was truly inspiring to hear the stories of these people, whose passion for what they do and believe in is amazing. We were also thrilled to listen to the Peterborough Pop Ensemble (led by Inductee Barbara Monahan) perform their rendition of the national anthem and entertain us in the lobby before and after the ceremony.

2 thoughts on “Peterborough Pathway of Fame”