Punta Gorda Florida is a beautiful place, even after the  vast devastation during Hurricane Charley in 2004. There are still empty lots where houses once stood, but those have been cleaned up and now appear as just green space.

The area where my sister lives is called Punta Gorda Isles. It features a number of canals running through the “back yards” of the lovely homes, and converging to run into the Peace River at Charlotte Harbour. Most homes have boat lifts and some impressive boats hoisted on them,  out of the destruction of the salt water when they aren’t in use.

The scene from my sister’s sun room

It’s a photographer’s paradise, with the various types of Palms and other trees showing off their blooms, sparkling calm water ways and pink sunsets. Although I’ve yet to experience it, I’m told that dolphins can sometimes be seen playing in the canals too.

This time of year the temperatures climb a little higher than is really comfortable for us non-residents, but there is always the pool to cool us off, and every home, store and restaurant is well air-conditioned. Speaking of stores and restaurants, there are enough here to meet everyone’s needs. 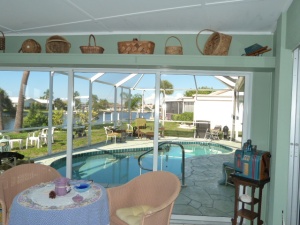 One thing to remember though, if you happen to be visiting someone here and are coming by motor home or pulling a trailer, you can’t park either one in the driveway or on an empty lot. We moved the motor home on Wednesday; when we got back we found a ticket on the door saying that we could not leave the little motorcycle trailer where it was, pulled up close to the house, nearly hidden by the bike!  My sister had to remove her car from the garage so we could put the trailer in there.  Just to be safe, we put the bike in too. 🙂 That turned out just as well; we had a thunder storm last night.

If the weather stays clear tonight, we will probably go to listen to the music in the park.