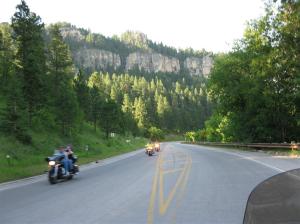 Day 9 – Thursday
Today wasn’t quite as hectic. We spent the morning taking care of business and laundry so it was early afternoon before we got out on another bike tour. This time we went back to Deadwood to see it in daylight and stroll through the downtown. From there we continued on to Spearfish Canyon. That is a biker’s dream ride, lots of turns through pine forests and enormous mountain cliffs. Before starting though, we had to stop at Cheyenne Junction for a bite to eat. Since it was a little too early for dinner, we decided we’d have dessert first – an absolutely delicious piece of homemade Mountain Medley Pie with vanilla ice cream and drizzled with raspberry sauce. Mountain Medley is a combination of rhubarb, black berries, raspberries and apple. Mmm. Other patrons were stopping at our table and drooling over it.
We stopped for some groceries once we got through the Canyon, at the city of Spearfish, and then came on home to make dinner. A half hour after we arrived a big wind storm rocked the motor home and Jim had to scurry to put up the awnings. We were very happy that we’d decided to come home early tonight.

As I publish this, the wind is up again. Could be rocked to sleep tonight. 🙂

Day 8 (Wed)
I was a day late, but I finally managed to call Mom to wish her a Happy 96th Birthday, before riding into Sturgis for the pancake breakfast sponsored by one of the churches (still haven’t got the grocery shopping done). We returned home to take care of a bit of business and then we got on the bike and took off for the day. We had to go to Rapid City to mail a package, but after that we put troubles behind us, riding up the twisty road towards Mount Rushmore. It was a beautiful ride. We stopped at the Gas Light Bar & Grill in Rockerville for lunch. I had one of the best salads I’ve ever had – chicken, walnuts, cranberries, shredded cheese and lettuce with raspberry vinaigrette. It was huge. I felt badly when I couldn’t eat it all. Jim managed to finish off most of his seafood salad, which he thoroughly enjoyed as well. Rockerville is a ghost mining town containing old abandoned shops, a bank and a few homes. Other than a few occupied homes, the Gas Light is pretty much all that’s there, nestled in the valley between the north and south sides of Hwy 16. We wouldn’t have found it if it hadn’t been recommended to us by a fellow biker who’d shared our table at breakfast.
Next stop, still along Hwy 16, was Keystone, a wonderful town whose historical downtown has been preserved in the manner of the gold rush days. It too was packed with bikers. We spent an hour or more poking through the shops and taking pictures before carrying on to Mount Rushmore.
The climb through the mountains was amazing, the sheer rocks naturally carved into some interesting works of art. And then the famous faces of the four Presidents, Washington, Jefferson, Roosevelt and Lincoln, came into view. Awesome! We spent another couple of hours touring the National Park Information Centre and taking pictures. From there, we had to go see Crazy Horse, an on-going sculpting project commissioned by the Lakota Indian tribe back in 1948 as a monument to Chief Crazy Horse. The original sculptor is dead, but his wife and kids are carrying on the dream, all paid for by donations, draws and sales at the commercial outlets and museum. Government funding was turned down by the family. It will be many more decades before the project will reach fruition. The contributions made by the thousands of bikers who would visit this week, would make a big difference, as acknowledged by the “motorcycles only” designated parking.
It was after six when we left there. We opted to take Hwy 385, stopping in Hill City for dinner. Here the entire downtown business part of the main street was closed to all vehicles except bikes, and bikes there were! The sun was setting when we left and the reported 100 degree Fahrenheit temperature earlier in the day was quickly dropping. Watching for long-horned mountain sheep, we saw some scaling the rocks to our left and stopped to take pictures. They seemed curious and began to descend towards the road. Just as curious were other bikers and people in cars who began to stop too. There was some concern then that the sheep would cause an accident when a couple of them scurried across the road in front of a car and a bike. As we drove off, we warned approaching vehicles to slow down. It was dark by the time we reached Deadwood, so after a quick tour of the main street that was busy with biker activities, we continued on our way, arriving back at the camp at 9:45 pm. It was a great day, but exhausting, especially after I stayed up late posting pictures to Facebook. 
Before we left on this trip I’d just finished a book by Nora Roberts called Black Hills. It’s been interesting seeing The Black Hills that she writes about and the area towns, like Deadwood.

Day 7 (Tues)
After discovering that the device for getting onto the internet, which we bought the night before, just wasn’t going to work, we headed back into Rapid City with computer packed into the saddle bag, expecting to get help quickly from the computer geeks at Best Buy. The first geek couldn’t do it so he called the sales associate from the mobile phone department. He could do it through the phone help line, if only he could get through to them. He was on hold for twenty minutes, when another geek, the head of the department suggested that a different device would work better for our needs and could be installed very quickly by her. It was more money, but we decided it would be worth it if it was going to work. So, we made the exchange. That wasn’t a simple process. A monthly invoicing system had to be set up because, unlike the previous device, a one month prepaid card couldn’t be purchased. Our having a Canadian address made that process complicated. It took about an hour just to set up the account. Then, it was back to the geek desk. A half hour later, the geek was still trying to get this device to work. In the meantime, the head of the mobile phone department came in (he’d sold us the original device) and he tried to help with first the account set-up and then the device set up. We left for lunch. When we got back, the head geek had left for the day, leaving the problem with yet another geek. Another half hour passed before it was finally discovered by the mobile phone fellow, that the battery hadn’t been installed in the device! We thought that was the quick fix, but no, it still wouldn’t work on our computer, but it did work on theirs. So, after wasting four hours of our day, we left with computer and device once again stashed in the saddle bag. Jim decided he’d like to take a back route home, and it was a lovely ride, until we ran out of gas! Fortunately a kind lady who lived nearby went home to get us enough to get us to Sturgis and a gas station. Once we were finally back in the RV Jim went to work on the computers and internet device and he got them both working. At least the day ended better.