It’s snowing here today, in Ontario, Canada – not the usual weather for this time of year. It’s a perfect day for doing some mind travel, back to the Superstition Mountains of Arizona.

Jim, Karen and I set off in the morning for our final adventure of the season. Our primary destination was to climb to the cliff dwellings in Tonto National Forest, in the Superstition Mountains. It was already noon when we reached the entrance to Monument Park where the caves were located. Unfortunately we hadn’t packed a lunch. We had expected to find a restaurant or at least a snack bar somewhere close by, but there was nothing. The small visitors centre offered only a few types of energy bars at $4.00 a piece and a water fountain. Outside there was a vending machine that provided only pop.

There are two areas of cliff dwellings – the Lower is a half mile hike away, the Upper a mile and a half hike up the mountain. It was the Upper Cliff Dwelling that we wanted to see. Knowing that we would find it difficult to make the climb without some food in our stomachs, we purchased some bars, Jim and Karen got pop and I refilled my water bottle at the fountain before heading to the trail. There is usually a $3.00 fee (good for seven days) requested for the tours and reservations are needed. But, since this day was National Heritage Day, there was a free open house, and self-guided tours were permitted to both the Upper and Lower Dwellings.

At the base of the trail a few native American artisans displayed their craft and demonstrated dance and costumes; some birds and other wildlife were on display.

The day was comfortably warm and breezy. The terrain was rugged. We took our time, stopping often to photograph or just catch our breath. The dwelling looked a very long ways up; however, switchbacks made the climb relatively easy even for those of us who aren’t accustomed to frequent climbing.

Other hikers up above us

Part way up we were warned by the Park Ranger that it would get very windy the higher we climbed. We made use of the ties on our Tilley hats, and sometimes thought that if the wind had been blowing in the opposite direction, it might have swept us over the edge of the cliff.

Karen and Jim enduring the wind

It was all worth the effort though.

The views became more and more awesome as we climbed. 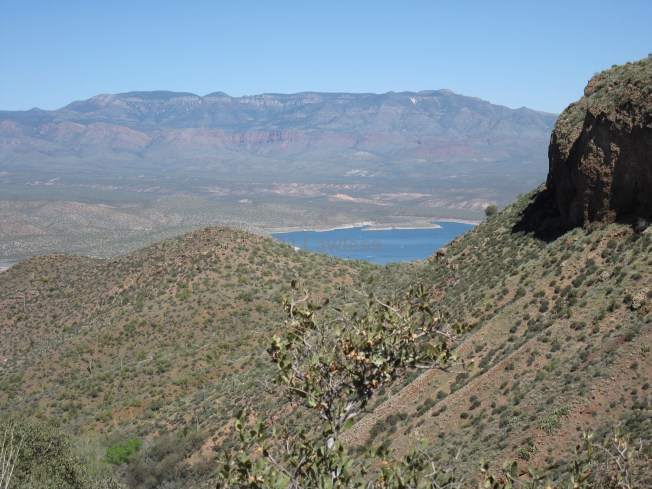 Views of the Valley from part way up

The soft melody of a flute could be heard in the distance.

In just over an hour we reached the remains of the 40-room Upper Cliff Dwelling. Situated in the northeastern part of the Sonoran Desert, these well-preserved cliff dwellings were occupied during the 13th, 14th, and early 15th centuries. There are many theories as to why the Salado people began building here. Protection from the elements is one possibility as the cave is dry even during the worst weather, and receives the full benefit of the morning sun in winter and cooling shade in summer.

We spent a half hour wandering through the eight accessible rooms. Some reinforcement restorations have taken place to allow public visits to continue, but a Park Ranger was there to insure that no one sat or walked on the ancient and now delicate walls. The source of the flute music turned out to be a young native playing softly in the highest of rooms. A feeling of amazement and peace encompassed us as we stood there on the side of the cliff. 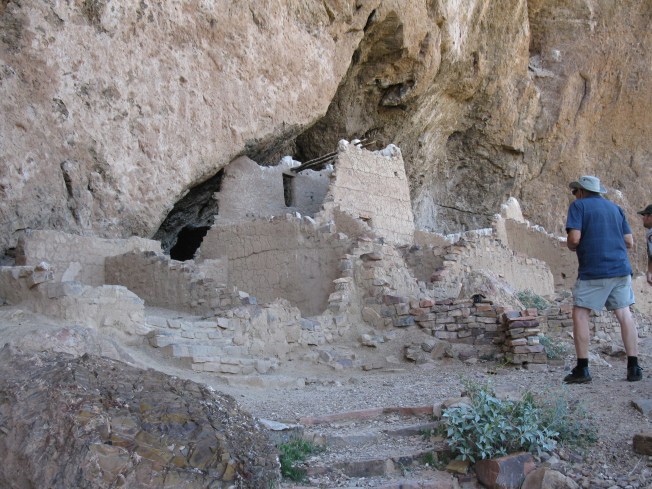 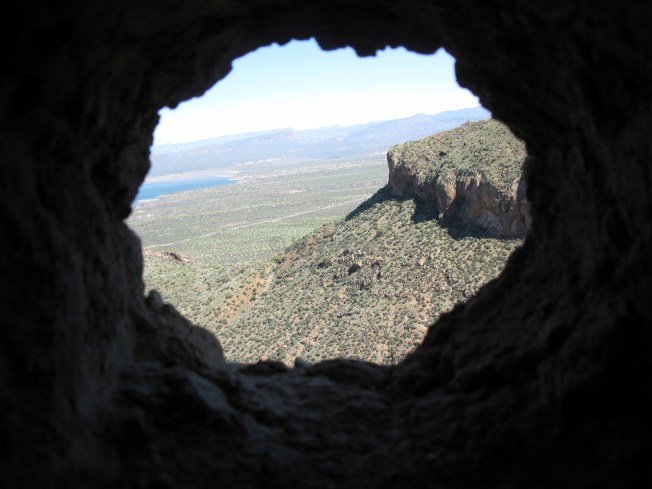 Looking out through a “window”

The hike down was a little quicker than going up. Upon our descent we got back into the car and continued on around the mountains. We stopped to look at Roosevelt Dam. 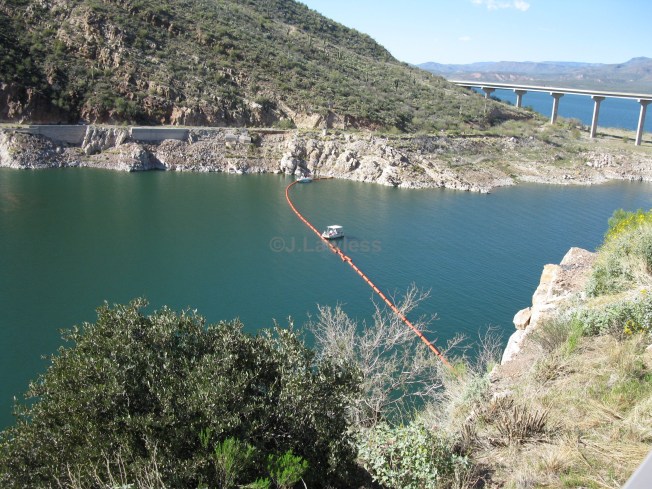 Once past the dam, the road narrowed, twisted and the pavement disappeared.We held our breath as we hung on the side of cliffs on the now very rough road, and we sighed with relief when we reached pavement once more.

We enjoyed dinner at Tortilla Flat, and indulged in one last Prickly Pear ice cream cone before winding our way back down to Mesa and home. 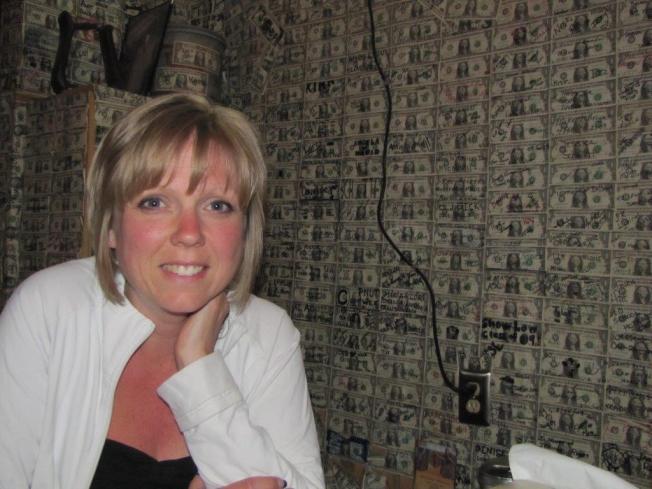 Karen in front of the wall of money