December 8th in Mesa Regal! Yes, we did arrive safely without any more annoyances, last Wednesday. Although it wasn’t hot when we arrived, it was a whole lot warmer than the night before in Holbrook, and it was wonderful to be greeted by our neighbours. It’s like coming home to family. So much so that it takes a long time to get settled in because of all the stories to be shared as people pass by on the street. A couple of fellows helped Jim to unload the bike from the trailer and push the trailer into the lot, something I just didn’t feel quite confident enough to do this time. We love it! By the time we finally got things somewhat organized (slide out, floor swept, cooler outside instead in the middle of the floor, etc.) I was too tired to cook, so we began the walk to see what the Grill had to offer.  We didn’t get too far. Our neighbours Bob and Cheryall saw us going by and invited us in to share their lovely meal of leftover beef and gravy with lots of veggies and salad. After the equivalent of a   large glass of wine (Cheryall kept replenishing what I drank) to accompany it, all my former stresses had disappeared and I felt no pain in my hip that night while I slept.

Thursday morning we were at the weekly coffee and donuts meeting held in Regal Hall, with some of our neighbours who’d saved us seats. This meeting is an opportunity for the Activity Committee and the Sales Team to bring us up-to-date on the coming events for the next week.

When we got home from there, we sorted the laundry in order to take it to the laundry room. I searched everywhere I could think of, but I couldn’t find either of the two laundry cards that we possess. I had to buy yet another when I finally got to the laundry room that evening, while Jim went to the ukulele jam. Somehow we just never got off the block during the day.

But our troubles weren’t over quite yet. On Friday when we did some grocery shopping at the very convenient Fry’s Store I discovered that the change they’d made at the end of last winter season, the one that caused my Debit Visa Card to become “unaccepted” was still not resolved. Fortunately I had some cash. Then we went to the fresh produce market across the street, where I had no problem using that same card last year, only to find that it no longer works there either. Back at the park, I went to the ATM to withdraw some more cash, knowing that was never a problem. The ATM was temporarily out-of-order! By the end of the day I discovered that somewhere along my journeys I’d lost the new bracelet that I’d treated myself to at the Country Store that morning. Saturday morning our fridge decided again that it was a freezer. Luckily most of the fruit and veggies I’d bought the day before were in the outside cooler. It was Sunday morning when Jim figured out how to fix that, and things started to turn around.

We borrowed a neighbour’s car and drove to Phoenix to look for another car; Jim drove back in this 2003 Sebring!

It seems to be a very good buy. We might not want to sell this one at the end of the winter. That evening we went out for dinner with a group of ukulele players, and then to the Mesa Arts Centre to see, again, The Ukulele Orchestra of Great Britain – another fabulous two hour show.

Other than finding out that the local internet provider, Century Link, was unable to connect us up this year because the wiring at this, our new chosen site, is fried, the week has gone well. We went back to using a T-Mobile Hot Spot for internet. We spent some time watching the three-day Pickleball Tournament here in the park; I volunteered a couple of hours working in the kitchen selling lunches.

We got the RV washed. Today I was pleased to see that my Debit Visa Card still works at Costco, and that I was able to dance to the rock and roll music of Come Back Buddy on the patio this afternoon. 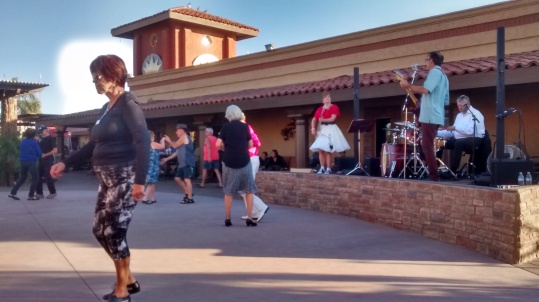 The temperature climbed enough for us to dig out the shorts too. Life is good (as long as I can ignore that little nagging feeling in my gut that something just isn’t right and trouble is on the way). That reminds me – better register with the Canadian Embassy.

That’s all for now folks. Hope to have some new real adventure stories in the new year, but for now it looks like birthday parties and Christmas parties and bocce ball and maybe some pickleball are filling our calendar.

WISHING YOU AND YOURS A MERRY CHRISTMAS, HAPPY HOLIDAYS, and a HAPPY NEW YEAR!

The Canadian Snowbird Association (CSA) is a 100,000 member national not-for-profit advocacy organization. It is dedicated to actively defending and improving the rights and privileges of Canadian travellers.

Each winter CSA executives travel to popular locations where Canadian Snowbirds escape the harsh winters of their home provinces, to connect with them, and to bring them up-to-date with what CSA has accomplished and its on-going projects. The month of February, in Arizona, has been declared Canada Month. What better time to present a Snowbird Extravaganza, which not only provides CSA information, but free entertainment, and vendor displays.

On Monday we made the short trip to the Mesa Convention Centre to attend this, our first, Extravaganza.

We were a little later getting to the Centre than we’d planned, and the parking lots were already filling up. When we arrived inside it was apparent that if we wanted to get a seat in the designated “theatre” area we needed to grab them quickly. We discovered, however, that most of the chairs were occupied with the plastic welcome bags given out at the door.  The seats were being saved by people who wanted to insure they had a seat, but still wander around the vendor booths while waiting for the show to begin. We managed to snag two chairs in the very back corner, up against the curtain that acted as a partition. While many people had to stand in the outside aisles, leaning against the walls, most of the “saved” seats remained empty until the last few minutes before the show started.

After the Welcome and a briefing from the Canadian Snowbird Association, the entertainment began with the kilted, guitar playing tenor from Cape Breton Island, Nova Scotia, Tom Leadbeater. He kept us clapping, smiling and singing along to the many old familiar songs of the region. He was followed by Irish-born comedian, Sean Emery, who travels across the US, spreading laughter with his jokes, sarcasm and oddball juggling stunts. Unfortunately, from where we sat it was difficult to see some of the stunts, even on the screen that was provided. The final performer of the morning was multi-award winning Country Music Artist, Michelle Wright. Sadly, the volume of chatter coming from behind us drowned out her beautiful voice.  We decided to find our way to the food venue before the rush. Outside the theatre we could hear her much better.

On the outdoor patio we enjoyed the warm sun, and ate our purchased sandwiches before the long lines began to form. We didn’t linger to listen again to Tom Leadbeater, who was setting up on the outdoor stage. We let some others have our seats.

Back inside we checked out the vendors of vacation spots, miracle pain treatments, Las Vegas entertainment and Casinos. We picked up information brochures from CSA and the Canadian Consulate before heading back into the theatre in search of seats for the afternoon show. Again, the plastic bags occupied the majority of seats that were otherwise empty, but we found two empty ones much closer to the stage than before. While we sat waiting, a ruckus started in the row behind us.  It seemed that a couple had come back from lunch and expected to get the same seats they’d occupied all morning, but another couple, not seeing any indication that the seats were saved, had taken them over. An argument ensued. The new occupants refused to leave, and the other fellow left in disgust after throwing out the comment, “Damn Canadians!” I looked around in shock. Why on earth was this man, with an obvious dislike for Canadians, attending a show that was provided and sponsored entirely by Canadians, with the majority of the entertainers hailing from Canada and the majority of attendees as well? The only explanation I could think of was that it was all free, and anyone was welcome.

The afternoon entertainment began with two senior singer/guitar players who claimed to be “the first openly grey performers to appear on stage.” By the time Bowser and Blue left the stage forty-five minutes later, my jaws ached from so much laughter. Their political comments, presented through musical parodies, were brilliantly hilarious. But the laughter didn’t end there.

Next on the stage was Jimmy Flynn, dressed in his plaid flannel shirt, overalls, rubber boots and a bright yellow Newfoundland fisherman hat. He kept us in stitches for another half hour with his “Newfie” style stories about family and friends and life in a fishing village in Eastern Canada.

The show ended with the beautiful tenor voice of a long-time favourite of many Canadians, John McDermott.

If laughter and music are the best medicines, we should be good for at least the rest of the season!