We’ve been sticking pretty close to home since our return from Arizona, but plans are in the works. We will be leaving to return there earlier this year, in September, to include a trip across Central and Western Canada, before crossing into the U.S. on the west coast.

Before that decision was made, I had hoped that we could accept an invitation from friends to visit them at their cottage on Prince Edward Island, on the east coast of Canada, but we can’t do it all at once. We did that trip in 2007, before I started this blog and before we started RVing. That trip was done on our Yamaha Venture, pulling a small cargo trailer containing tent, sleeping bags and all necessary gear for a month long journey.  We were a few years younger then!

After stopping for the night in Brockville to spend some time with family, and having a late, leisurely breakfast, we finally got on our way around 11:00 this morning. Jim’s nephew, Dave, joined us on his 650cc V-Star with all his gear strapped to the back. The rain from the day before had cleared and the weather was perfect for riding.

I’d promised my former mother-in-law that we would stop in to see her on our way through Quebec, but my estimated time of arrival was way off. I felt badly when we arrived at 1:45 in the afternoon to find that she’d been saving a big lunch for us since noon. It was 3:00 pm before we felt it appropriate to leave.

Three and a half hours later, we rounded a corner in search of our pre-booked campground near St. Nicolas Quebec and were shocked to see a giant Santa Claus and Snowman bobbing in the wind at the entrance! While we checked in at the office we heard French Christmas Carols blasting from a loud speaker.

Along the path to our campsite we passed more Christmas decorations, including a miniature Christmas Village and what appeared to be another Santa, sleeping it off in a pup-tent, empty beer cans strewn around him. Apparently the Canadian Snow Birds who summer here celebrate Christmas in July. 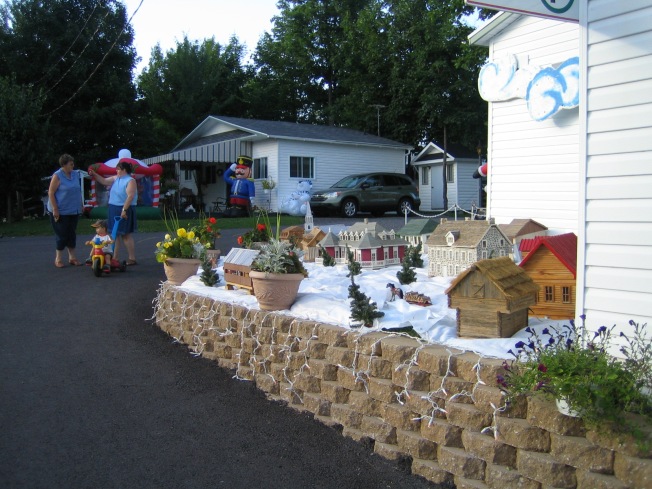 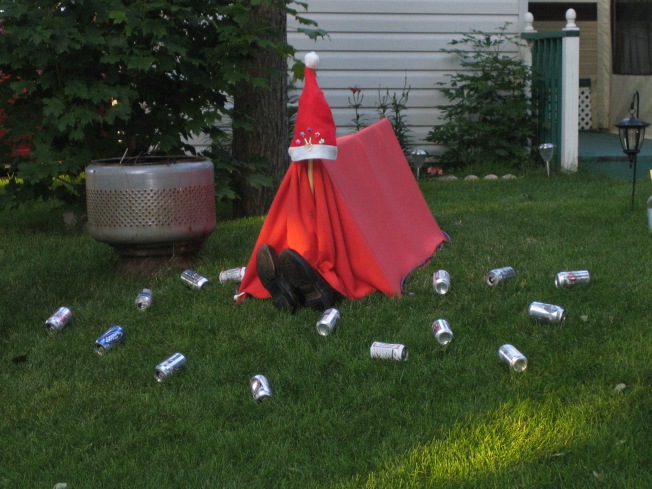 We set up our tents before riding further down the road to catch the ferry at Levis, which took us into romantic Old Quebec City. 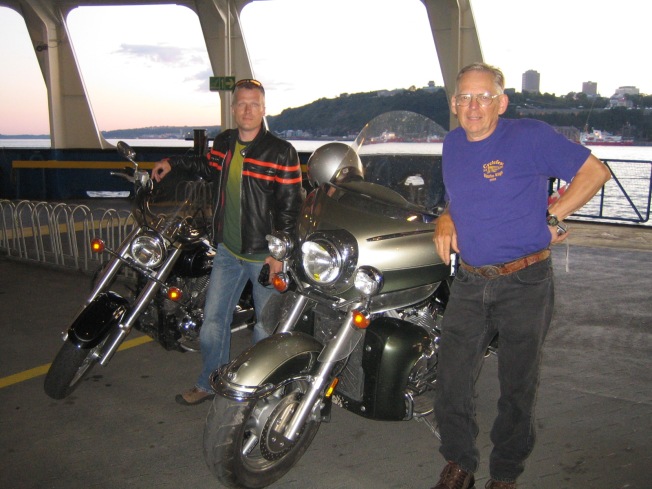 Dave and Jim with bikes, on the Ferry

There we enjoyed some French Cuisine on a patio, and admired the artwork of the street vendors, before heading back to the Christmas celebrations at St. Nicolas. We even joined in on some of the dancing while a family band performed country and folk music. Since no one spoke English, we didn’t get to know anyone. The party lasted until 1:00 am. It was a very long day!