Every other day of the year, Port Dover, Ontario is a quiet little fishing town located on the north shore of Lake Erie, but on any Friday the 13th the population explodes, especially if the 13th falls on a hot summer day! That’s the day that bikers (motorcycle) congregate, arriving from miles away, a tradition that began with a few biker friends in the early 1980s and rapidly caught on. Estimates for visitors that day range from 150,000 to 200,000.

We hadn’t been there for a few years, but after an offer from my uncle to visit him in Kitchener the day before and leave for Dover from there, we decided to make the trip.

The day was already very warm when we left Kitchener at around 9:00 am. Never having approached Port Dover from that direction before, Jim was making use of the GPS, but that’s more difficult on a bike than in the car. At one point, going through Brantford, he pulled into an exit lane at a traffic light before immediately realizing that that wasn’t where he wanted to go.  The traffic was stopped, so he eased back into the driving lane, having to share it with the vehicle that had been in front of us, because the gap had already been closed. Is it unreasonable to believe that the driver of the next vehicle would hesitate just a second when the light turned green, and let us back in? We didn’t think so, but apparently the old girl in the SUV thought we had no right to be there.  She drove straight ahead past us, ignoring us completely! Five minutes later she pulled into the Casino parking lot. Oh, so that explained her urgency! Those slots will wait for no one!

It wasn’t long before the roads began to fill with other bikers and we knew we were on the right path. We drove through the town of Boston, where the church had signs welcoming bikers for lunch.  Although it was still only 10:30 am, many had stopped there for a break.

We were surprised at how quickly we were ushered into Port Dover by the many teams of police officers directing traffic.  On previous visits we usually were slowed to a crawl for over an hour before even catching a glimpse of our destination. Perhaps arriving from the west had it’s advantages. Bikes lined every street; homeowners rented spots on their lawns for anywhere from five to ten dollars for the day, although I suspect that not many stayed put for the whole day.

How to make a few bucks on Friday the 13th!

We were fortunate enough to find a just-emptied parking spot on the street in the downtown area, and it was right near the port-a-potties so I could slip in to change out of my heavy jeans and shoes and into shorts and sandals. It was hot! After applying a generous dose of sun screen and donning hats and sunglasses, we began our wade through the mass of bikes and people — handle-bar to handle-bar, shoulder to shoulder. 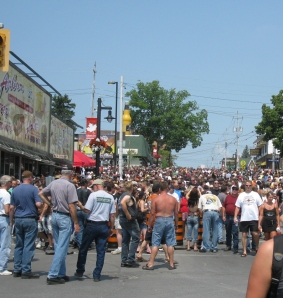 For the next four hours we toured the streets, seeing strange bikes and awesome bikes, and some weird sights as well. 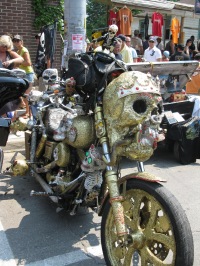 Someone had a lot of time on his hands! 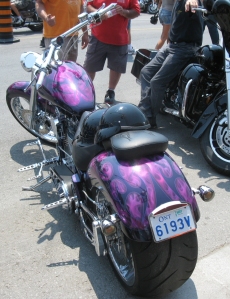 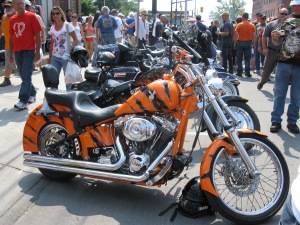 Not an event for only macho bikers! Love their spirit.

At lunch time we headed for our favourite restaurant for a feed of Port Dover’s famous Yellow Perch. However, this time the line up was out the door to the street so we thought we’d find something else.  Well every restaurant had an hour wait.  We finally settled for some very good homemade pulled pork on a kaiser served from a street vendor who offered a few tables in a parking lot.  And we drank many bottles of water!

At 2:00 pm we decided we’d seen enough. Much to our dismay, it took a whole lot longer to get out of town than it did to get in. Streets were blocked off, forcing everyone to follow a big loop around town before reaching an exit, and then we weren’t on the highway that we wanted so we had to drive a few more extra kilometers before we got heading towards home.

At Haggersville we experienced the usual delay, the one we’d missed on the way to Dover this time. There are three traffic lights on the highway going through the small town of Haggersville, and they aren’t co-ordinated. On a day like Friday the 13th, when the usual traffic probably quadruples, this causes major back-ups of bikes sitting sometimes through three red lights before finally getting through the intersection. The rest of the trip was pretty much the same — stop and go all through the Greater Toronto area. We stopped in Oshawa for some dinner at 7:00 pm and were really glad to pull into our own driveway at 9:00 pm.,  exhausted. It was a fun day.

Tonight we are at the Westfield KOA, NY. We took our time today and by the time we got this far it was just too far to go to get home at a decent hour, so we stopped in at this lovely site on Lake Erie. This is the end of this adventure — we should be home tomorrow afternoon.

We left Pigeon Forge after lunch on Monday and got as far as Renfro Valley, Kentucky before stopping at the KOA.The drive was hot and uneventful, as was the next day, when we drove through to Columbus, Ohio. The traffic was heavy when we arrived in the outskirts of the city and there were some very rude drivers on the road.  When we were driving in the right-hand lane, passing an exit ramp, a woman in a van to our left suddenly decided she was going to go off at that exit. She pulled in front of us and stopped dead in our lane because the exit ramp was already full.  She waved her hands at the driver of the car beside us, motioning him to back off and let her in! What nerve! It’s a good thing that Jim had already slowed down to a crawl because of the already slow moving traffic (turned out that there was an accident up ahead, causing the jam). So many people don’t realize the weight of a 32′ motor home, pulling a bike on a trailer.  We can’t stop on a dime!

We enjoyed a great meal at The Cracker Barrel and didn’t feel like going any further, so with the permission of the manager we set up for the night in the parking lot. There was some shade and we were the only ones in the large lot after the restaurant closed at 9:00 pm. At 9:30, just when we were thinking of going to bed, a semi pulled up right beside us, left his engine running and his lights all on, including his signal lights, and crawled into his sleeper cab and went to sleep! If you’ve ever been parked next to one of these for any length of time, you know all about the many loud noises they make.  If he had to nap there, could he have not at least had the consideration to go to the other side of the lot? We debated about pulling out and trying the Walmart lot instead, but I was too tired.  We were thankful to hear him leave an hour later.

Tonight, after a dinner of left overs, we  took a walk to the park across from the campsite to capture some pictures of the sunset over Lake Erie.

Last Sunset of This Adventure 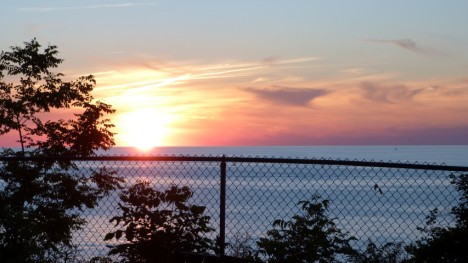