We left Stanton, Missouri on Sunday morning and headed toward Springfield, hoping to have lunch at Lambert’s Café again. Unfortunately it was just too busy. We didn’t feel we wanted to wait the hour and a half to get a seat, so we found a little Mexican Café in the mall across the street, and were soon on our way again. We pushed on to Edmond, Oklahoma before stopping for dinner and the night at the local Cracker Barrel Restaurant. That was not a good place to spend the night. It was located at the intersection of two highways and there were two truck stops on the corners. The noise continued until well into the night, so we didn’t get much sleep.

We were on the road by 9:15 the next morning and crossed into Texas before noon. Since we were not far away, we made a detour into McLean again. This time the restaurant and the museum were open. We spent a couple of hours eating and looking around, before journeying on through to Amarillo arriving in late afternoon.

At Chuckwagon Cafe in McLean Texas

Just a few of the many, many interesting historical items in the Museum

As we turned south onto I-27  Jim saw the sign for Palo Duro Canyon State Park. Remembering that our friend Alice had suggested we should go see it, we followed the directions. We were glad of it. It’s beautiful! We drove around the canyon before the sun was gone, and took lots of pictures. We camped there for the night. All was dark and quiet, a big difference from our last night stop.

The next morning we continued on to New Mexico. Our plan was to go to the Carlsbad Caverns. When we stopped for gas at Tulia, Texas, we watched this crop duster at work.

We arrived in Carlsbad at 2:30 in the afternoon and stopped into the Chamber of Commerce to get information about the Caverns and camping. We were too late to catch the last tour of that day, but we learned that there was a big bat exodus from the caves in the early evening. Donna was very helpful in finding us a place to park for the night as there was nothing at the Caverns. After stopping for some groceries on the way out of town, we drove south toward the Caverns.

That is when our plans took an unwanted turn! The highway wasn’t very busy. We were cruising along in the right hand lane and coming up to a flatbed tow truck that was riding in the left hand land. It had two pickup trucks on it and Jim hesitated to hurry past it because the load looked possibly precarious. I was just going to comment on it when suddenly the cap came up off the first pickup. We thought it would just go over the other truck and land in its bed, but instead the wind turned it into a flying missile heading directly for us! Jim braked as hard as he safely could and swerved slightly to the right. Visions of the thing crashing through the windshield and knocking Jim out flashed through my mind. With a very loud thump it hit the windshield right in front of his face, but fortunately it didn’t break through! The tow truck seemed to keep on going until Jim blasted the horn several times. Our windshield was badly cracked, but the worst of it was below eye level, so Jim could still see. Eventually the truck pulled over to the right shoulder ahead of us and a white company pick up pulled in behind it. We were both in shock! The tow truck driver/owner walked back to see if there was any damage. He was looking at the body of the RV. Jim pointed out the windshield. He introduced himself, apologized many times, got a clipboard from his truck, and began writing down the details of the damage. The windshield wiper was broken off and there were a few dings on the fiberglass. At first I thought he said that the cap hadn’t been strapped down, but later he said that it had but the strap had broken. He said that he saw it go flying. He immediately took responsibility, calling a mobile auto glass repair company and asking them if they could get a new windshield for us. He told them that he wanted to pay for it right away, but they said they would let him know if they had one first. He told us we should drive to the nearest big city, El Paso Texas where we should be able to get the wiper replaced, and to let him know where we were when we arrived so that the glass company could find us. He gave us his business card. I asked about compensation for an extended stay and, although he didn’t think that would be necessary, he agreed to pay for one night. We had no cell service on that desolate highway, but we felt confident that he was going to make sure we were taken care of. 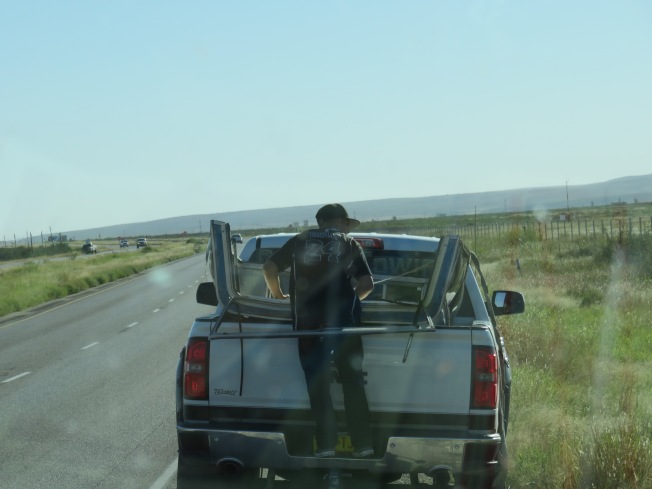 The cap being put into truck

We watched the cap being loaded into his pickup truck and strapped down (the tow truck had already been taken away by the other driver), before we pulled back onto the road and made our way to Carlsbad Caverns. There was nothing more we could do.

The bat flight was to begin at 5:45. We arrived in the parking lot, after a seven mile up-hill climb, at 5:00 and had a quick snack before finding our way to the amphitheater situated at the entrance to the bat cave. A Park Ranger talked to us about the thousands of Brazilian free-tailed bats that would fly en-mass from the cave for a night of feasting on insects. He told us that there would be no more than two chances to witness this flight before the bats would leave to migrant south.  In fact, there was no absolute certainty that they would even appear that night, but shortly after six the exodus began. Everyone, even the small children, sat in perfect silence, watching with mouths agape, as the bats flew in funnel –like formation before moving off in clusters in search of their prey. By seven o’clock they were still emerging, but the sun had gone down and we were cold and tired and still had to find our campsite further down the highway so we left. Our hearts were in our mouths when we noticed that we’d left the motor home lights on! Jim was amazed and relieved when the motor turned over with the first turn of the key. 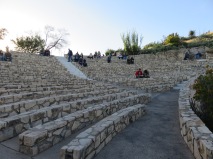 We weren’t allowed to take pictures of the actual flight. This is a picture of a picture.

The accommodations that Donna had booked for us were not at an RV Park, but one of three sites at the Camp Washington Conference Centre. The two nearby RV Parks were both completely full. We knew from the map the general area of the Camp and we put the address into the GPS. Finding the exit off the highway was easy, but we were taken on a long winding dirt road back into the woods, toward a mountain, and then a sharp turn. We were told that it was a beautiful spot, but it was so dark, we had no way of knowing. Finally we came upon a large building with a lighted parking lot – the office. We were told that it would be closed, but someone would collect our money in the morning. The trouble is, we could see no sign of any other RVs. There was supposed to be one other. We looked around with a flashlight, and started down another road that seemed to lead to other buildings, but it was narrow and the willow trees hung too low for us to get under them, so we backed up and turned around. Jim found a notice on the building that said the RV sites were on the north side of the property, which would be somewhere behind the building, but we saw that there was a lake there! We drove back the way we’d come until we found another dirt road to the right. It looked doubtful to me, but Jim pushed on. The road got more and more narrow. We came to an old Fire Station. Then we saw an arch with the sign Camp Washington. We eased our way through and as we turned around a clump of trees we saw the other motorhome and a few other buildings. After we pulled in, our neighbour came out to greet us and assured us that it was a really beautiful spot in the day light. At least it was quiet, if cold. We were so happy to crawl under the covers for a good rest.

I was up at the break of dawn hoping to catch some good photos in the sunrise. Here are some of the things we saw before and after breakfast.

I was wishing we could stay another night, but we wanted to see the Caverns and then had to be on our way to El Paso. On the way out we discovered that at the fork in the road coming in, we should have taken the one to the right, not the left.