Many of you know from following me on Face Book that we are now in El Paso, Texas, stranded until we can get a windshield replaced. I won’t go into further details now, because I’d rather share some of the lovely trip we’ve had along the way before this problem suddenly hit us. Before now I’ve not had adequate internet connections to post anything.

After his carpal tunnel surgery, Jim was forced to wait until October 17th before he had his second appointment with his surgeon and was given the green light for us to leave for Arizona. By then we had most of what we needed already loaded into the motorhome, and we’d planned to finish up some things in Peterborough while we were there, in preparation for leaving the next morning. Well, as usual, the best laid plans don’t always work out. The US money that I ordered wouldn’t be into my bank until the next day, and our barber wasn’t working that day. We got the rest done and figured we’d just stop back in on our way through Peterborough in the morning.

We were up very early to load the remaining items, mostly the food and the electronics. It didn’t seem like much, but it was 10:30 by the time we got away. When we were finished making our stops in Peterborough it was lunch time. We picked up wraps at Tim Horton’s and then finally got on the road. We’d planned to go only as far as Jim’s cousin’s place which we thought was near the Windsor/Detroit border. They were expecting us for dinner. It was just a tad further than we thought, but we arrived by 6:00 pm, exhausted. After a delicious meal of organic beef and fresh vegetables from their own farm, a couple of their friends joined us for some old fashioned hymn singing. One son played his guitar and Jim played his ukulele. It was a lovely evening.

The problem with getting together with long-lost relatives is that there is so much catching up to do and it’s hard to stop talking! Once again, we didn’t get on the road until after one in the afternoon. Therefore, we didn’t get too far that day either. We did have one new little adventure though. Dave had suggested we take a the ferry across the river from Sombra, Ontario to Marine City, Michigan, instead of our usual trip over the bridge into Detroit. It was small, and we had our doubts that there would be room for us, but they squeezed us on! It was a short and easy crossing into the US.

Wondering if they will take us

From Marine City we just pushed onward. Traffic going through Detroit was very slow, taking us over an hour to get through the city. Shortly after 6:00 we crossed the state border into Ohio and forty-five minutes later we called it a night in the Walmart parking lot in Napoleon, about two hours from the border into Indiana. The sunset was beautiful. 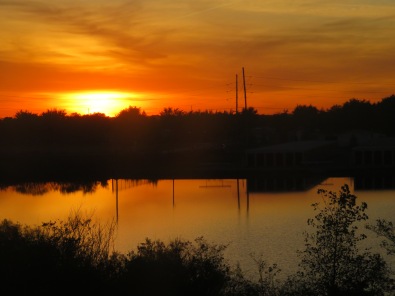 On day three we were up early and barreled right through Indiana and Illinois, stopping only for gas and meals. As usual, we got a little lost going through St.

Louis Missouri. We stopped at the KOA RV park in Stanton Missouri for a couple of nights so we could see the Meramec Caverns that we’d missed due to timing the first couple of times we were there. It had been raining off and on all day and was still drizzling when we arrived.

The next morning we left for the Caverns. This year we don’t have our trailer and motorcycle with us, so we have no transportation other than the RV. Jim thought we would unhook it and drive down to the Caverns, but it was only three miles. I thought we could walk as it was a nice day. After the first mile of winding, hilly road with little to no shoulders, we stopped at a yard sale to buy a backpack for $1.00 because the temperature had climbed and we found our hands were too full with cameras and water bottles, and the sweaters and jackets that we no longer needed. When we saw the sign for a very steep grade, we knew we might be in trouble when it was time to climb back up. The going down was difficult enough. We think that the three miles was as the crow flies, not as the road turns!

When we finally made it to the Meramec Caverns Centre, we had to nourish ourselves with pumpkin pie and coffee at the cafeteria before embarking on the eighty minute Cavern Tour.

At the entrance to the Caverns is a large room that was set up with a stage and chairs, ready for the 150th Annual Gospel Sing that would happen later in the day.

It wasn’t until we were about half way through the tour that we began to see the beautiful “decorations” inside the caverns, but it was a worthwhile, if pricey excursion. 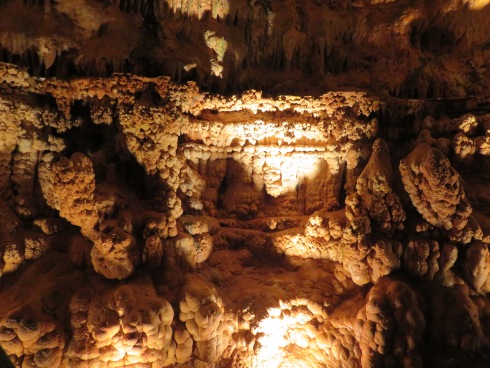 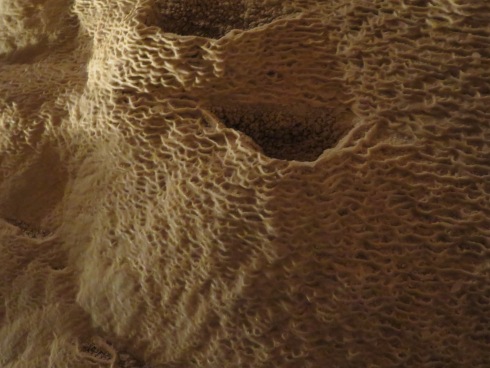 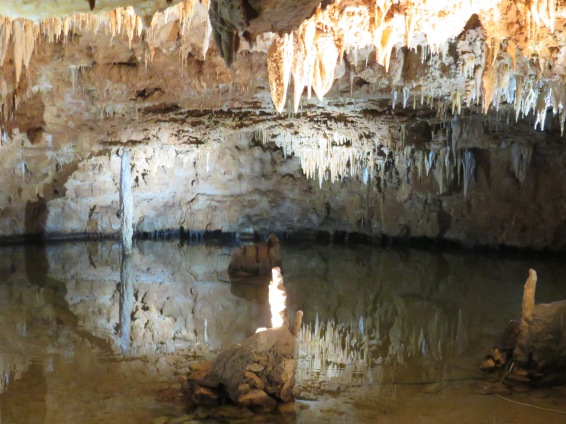 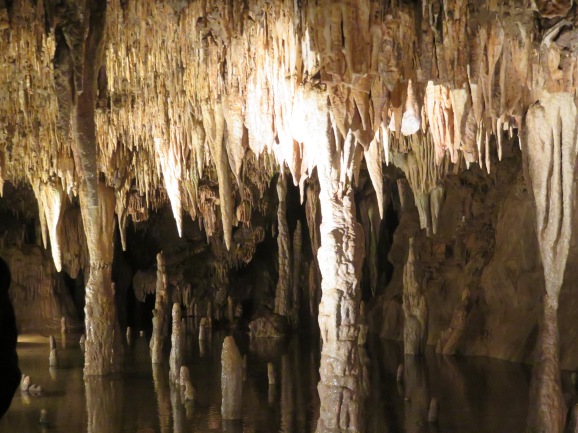 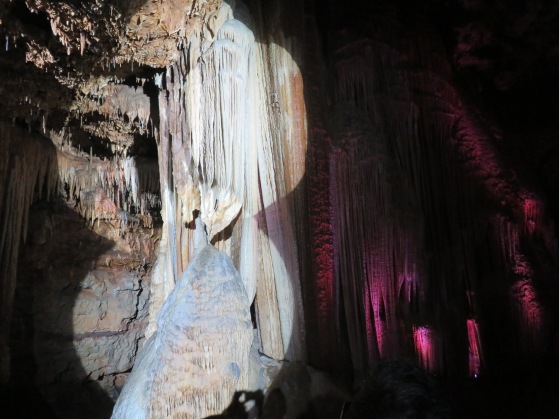 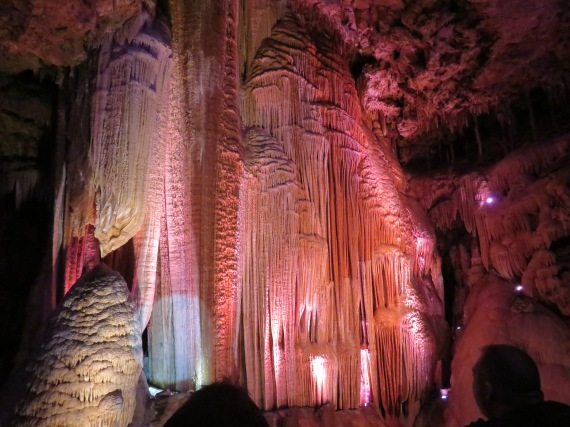 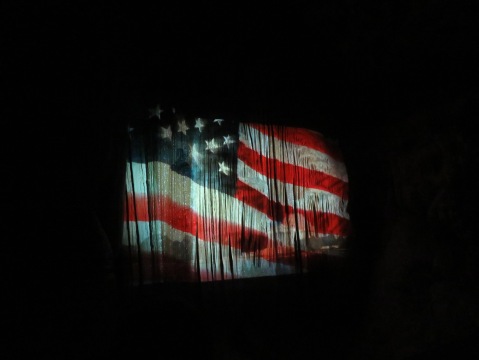 When we returned to the surface we considered buying tickets for the Gospel Sing, but I was just too hungry. We hit the cafeteria once again for lunch. Once back outside we watched people taking the Zip-line over the parking lot and river. If we hadn’t been so tired, and hadn’t seen most of the participants struggle to make it back to the stand on their return trip, we might have tried it ourselves. Of course the cost of $50 each was a little prohibitive too. 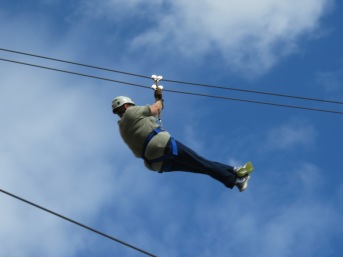 Struggling against the wind

We could postpone our trek back up the hill no longer, and we were right. We were in trouble. Half way up we started putting out our thumbs. The Gospel Sing had just ended and there was plenty of traffic, but the first half dozen cars passed us by. Finally, a nice senior couple stopped and cautiously allowed us into their back seat. I’m sorry that I didn’t get their names, but we had a nice chat and we were ever so grateful. We had walked over seven miles at that point, once again reminded that we are not as young as we sometimes think we are. We were in bed very early that night.

4 thoughts on “Year Five of Our Trips to Arizona”