My journey began a couple of months before I actually left, when I received an email from WestJet Airlines informing me of a great two-day discount on fares to British Columbia. It had been many years since the price of a return ticket had been less than $500, and it had been two years since I’d seen most of my BC family, so I had to act quickly. Through phone calls, texts and emails I was able to figure out the dates that would work for everyone, and get my flights booked by the end of the day. Jim decided he’d save his money for Arizona, so I was on my own.

Because my family members live many miles and many hours away from each other, it took me many hours of research to put together my busy itinerary, on a limited budget. Renting a car for three weeks and driving for hours by myself was out of the question, so I had to depend upon public transit. Before I left, I had most of it tweaked. I printed out two copies, one for me and one to leave with Jim. I attached mine to a large envelope and put all the necessary paper work inside, in date order. I knew that was the only way that I could keep from getting overwhelmed. I need to know my plan!

On August 7th, Jim and I drove to an inexpensive motel near the airport in Mississauga, where we stayed for the night so we wouldn’t have to leave home very early in the morning and fight the traffic to get me to the airport on time. Once we were settled into our room at the White Knight Motel, we decided to walk to the closest restaurant for dinner, where we, mostly, enjoyed a buffet of Indian food. I say mostly because I have difficulty with hot spices and a couple of dishes left me with watering eyes and burning lips, which is too bad, because I love the flavour of curry. On the way back we watched the jets flying over our heads to land at the airport behind our motel. I thought it would be noisy all night, but we didn’t really hear the roar after 11:00 pm.

At 8:30 the next morning, I was on a plane bound for Kelowna. Jim was on his way home. At 10:45 BC time (I’d flown through two time zones) my long-time friend, Judy, picked me up at the airport and provided me with meals and a very comfortable room for the night, as she always does when I’m on my way to my daughter Sarah’s home in Kaslo. I am so grateful!

We had plenty of time to walk around her quiet neighbourhood in Vernon, which is about an hour away from Kelowna and a mixture of smaller properties and larger farm properties. It’s not unusual to see people on horseback trotting along her street, or a family of Quail flitting through the neighbourhood. 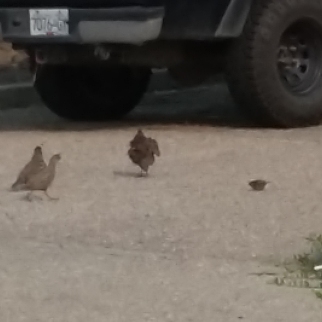 We also had long conversations on her porch, including discussion of the drought and wildfires that had put the province into a state of emergency. Smoke lingered in the air, obscuring the mountains.

After an early lunch the next day, she drove me to the Kelowna Bus Terminal where I caught my bus to Nelson. At 7:00 pm Sarah met me there and we had an hour to catch up while we drove to Kaslo. My traveling was done for a week.

4 thoughts on “Adventures in British Columbia, August, 2017 Part One – Beginning the Journey”