The time has flown by this winter, probably because we were late arriving in Arizona in the fall. The last weeks were filled with a bit of pickleball and a whole lot of eating out with friends before saying goodbyes. I will really miss all those people who have become an integral part of our lives. But I am anxious to get back to my efficient, well equipped kitchen in Ontario.  It’s been over a month since I’ve had a properly working fridge, which meant we ate out too much.

We left Mesa Regal at noon on April 1st, after our motorhome played a trick on us – the leveling Jacks refused to rise up off the ground. It took about an hour before the problem was solved with an electric drill being used to manually lift them to their traveling position. When we finally got the bike loaded into the trailer, said our final goodbyes and started off, we realized that when we’d parked and covered the car in its storage spot, we’d left the GPS in it! Fortunately it was just a few streets away so we swung by, uncovered the car, retrieved the GPS and re-covered the car. We were already tired! Some lunch helped, and then we were on our way.

By 4:00 we were almost at the turn off for Tombstone. We decided to stop there for the night, and spend part of the next day seeing some of the things we missed the last time we visited that old city. We found a spot in the Stampede RV Park, within walking distance of all the attractions. In the morning, after breakfast served in the park’s Coach Stop, we took the trolley tour, 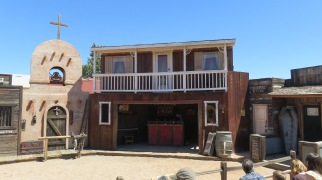 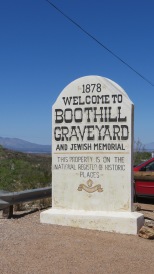 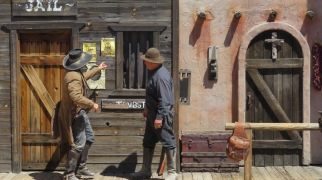 and looked around the Rose Museum, where the world’s largest rose is huge and presently blooming. 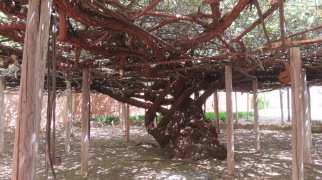 The trunk of the Rose Tree

Branches spread over a well-supported trellis

A big thanks goes out to Sue in the RV Park office who gave us a great summary of what to find and where.There are still a few more sites to see, but at 1:00 we knew if we were going to get out of Arizona before the day was out, we had to get back on the road.

We made it to Las Cruces, New Mexico before it was too dark, and stayed at the Coachlight Motel & RV Park.

One thought on “Leaving Mesa Regal”