We have been busy since arriving at our winter home, but mostly with things inside the park. On Friday, after the unexpected evening arrival of our friends Jane and Lloyd, from back home, that changed. They are taking a “long way round” trip this year on their way to their winter home in Florida. Because of some cold, windy weather in Winslow Arizona they decided to come further south before turning toward California. We were so glad to see them, and happy to offer them a tour of some of the things that we find amazing in the area.

After some catching up and warming up in the hot tub on Friday night, and a good night’s sleep, we took off to one of our favourite breakfast spots that we hadn’t yet been to this year – What the Hell Bar and Grill, and then we journeyed to Tortilla Flat on Superstition Mountain. Jane is as much of a camera buff as I am, so it was a slow climb, taking time to snap pictures. They were very much in awe of the mountain scenery along the way, and then the unique décor and lunch in the restaurant.

Customer donated paper currency from around the world covers the walls and ceilings.

We were too full to indulge in the prickly pear ice cream, but we enjoyed a little “gunfight” outside the school house. While we waited for the show to begin, the actors made small talk with us, establishing that we were all Canadian. Before the fight began, two of the actors asked for a Canadian volunteer.  Lloyd, being the good sport that he is, allowed himself to be drawn inside the rope, where he was immediately hand-cuffed and led to the hanging tree!

When the noose was around his neck, the Sheriff appeared and asked what was going on.

“We’re going to hang this guy!” his captors exclaimed.

“But he’s Canadian! So we’re still going to hang him!

At the Sheriff’s command, they let him go and got on with the show. The air filled with gun smoke after the shootout between a few former bank robbers and the Sheriff. 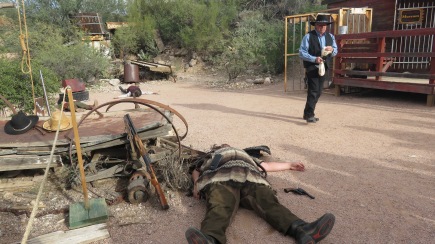 Of course, on the way back down the mountain we had to let Jane and Lloyd experience Goldfield Mine Ghost Town, a place I’ve written about before. We arrived just time to catch the last more elaborate gunfight of the day there. Lloyd wasn’t recruited this time. It was a great photo op though.

Sunday morning we were out for breakfast again, at another favourite Sunday morning breakfast place, Midwestern Meats, before starting out on new adventure. We drove out through Miami and Globe towards the other side of Superstition Mountain. Our destination was Tonto International Monument, a heritage site of cliff dwellings.

We took a wrong turn and got ourselves onto a narrow trail meant for four-wheelers, not a Sebring convertible! But Jim got us turned around without dropping over the edge and we found some more scenes worth shooting. 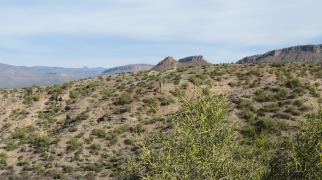 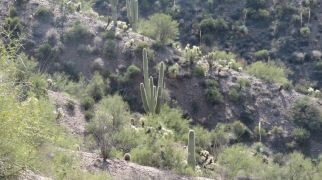 A few years ago we took Jim’s daughter Karen to the cliff dwellings and we hiked up to the upper dwellings. This time we did the lower ones, which was just right for us, since I’m still recovering from my hip surgery and Lloyd has a bad knee. This trail was paved all the way.

The weather was perfect, although I found it a little too cold and windy sitting in the back seat with the top down on the convertible. By the next morning my allergies were acting up.

We took the Bush Highway back into the city, and we were excited to finally discover some of the wild horses that had eluded us last year! 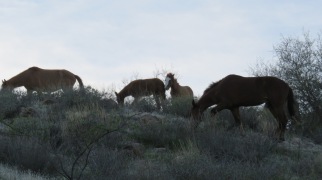 When we got back to Mesa I suggested The Organ Stop Pizza for dinner for Jane and Lloyd’s final adventure before they had to be on their way the next day. I’ve written about this before too, but it is always just as amazing. The food is very good, but the entertainment is spectacular. Music played by the very talented Mr.  Charlie Balogh, on the huge Wurlitzer organ, kept everyone bobbing and clapping and turning our heads to watch all of the various instruments on the walls and ceiling jump into action at the appropriate times. Again, Jane became so excited she could hardly eat her dinner. It was so much fun to see them enjoy themselves. 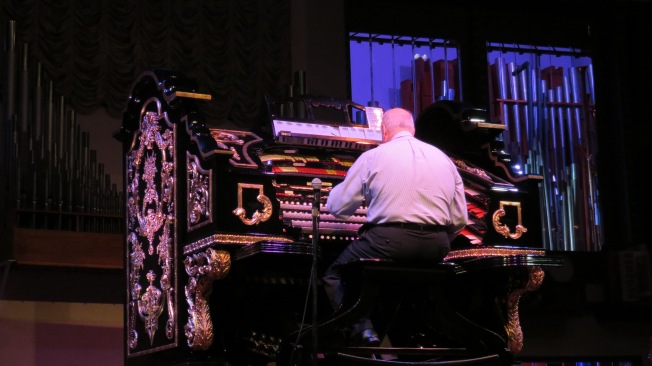 We hope that we have provided some good memories of their trip, and wish them safe travels.