If you missed the opportunity to get a free self-guided walking tour app for a city you’d like to visit, be sure to scroll to the bottom of my San Francisco blog and follow the directions.

After San Francisco we didn’t stay in any one spot for more than a night, but we did have some more interesting adventures, and the pain in my hip diminished enough for me to enjoy them.

We continued south on always-adventurous Hwy 1, around the curves, often hanging on the edge of the cliffs, and catching some amazing views.

Tunnel on the side of a cliff

At a spot when the the road was at beach level, we came across an observation parking lot where we stopped to watch hundreds of elephant seals fighting for mates and soaking up the rays. 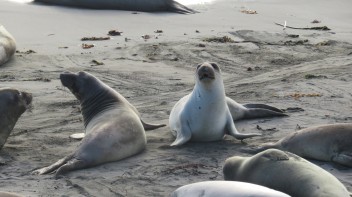 After a certain point we left all cities behind, and even the towns became further and further apart. Our plans to stop earlier that day were squashed. The two small RV/Campgrounds that we saw both had “Full” signs on them, so we had to keep going. Jim thought we might stop close to the Hearst Castle and take the tour, but by the time we finally found a spot to park for the night, at Hearst San Simeon National Park we were both tired. The thought of climbing many, many more stairs that the Castle brochure told us about sealed our decision to just keep on trucking the next morning.

We made it a short day. We needed time to do laundry and then relax. At noon we checked into Pismo Coast Village RV Resort, probably the nicest resort that we’d encountered the whole trip. We put our laundry in and crossed a courtyard to the Grill where we enjoyed the best homemade clam chowder we’ve ever had, while enjoying the warm sun on the patio.

When the laundry was done and put away, we walked through Pismo State Beach Park next door, and then into the Monarch Butterfly Grove to view clusters of our own National Butterfly, hanging from the branches of Eucalyptus trees – more Monarchs than we’d ever seen at one time back home.

After taking the many photos, trying to get the perfect shot, we walked over the sand dunes to the beach and almost got lost trying to find the path that led back to our RV Resort! 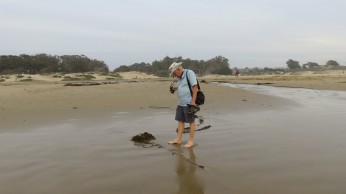 The sun was setting when we got back, and we’d worked up an appetite, so we found ourselves back at the Grill once more. Again we enjoyed some of that delicious chowder, and shared a seafood platter for dinner. 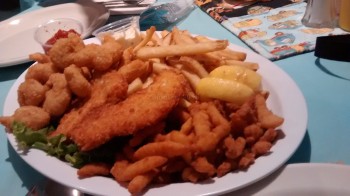 I almost hated to leave the next day, it was so nice there. By the time we’d unhooked and picked up the trailer from the storage lot across the street, and stopped at a Mexican Flea Market a half-hour down the highway, it was past lunch time. The scallops and shrimp leftover from the night before warded off our hunger for another hour until we drove off the highway into Los Alamos to see what we could find. We found a quaint little town with a terrific little diner, The Bell Street Farm Eatery, where we chose the Special of the Day – a very thick BLT made with local lean slab bacon, local tomatoes and lettuce, drizzled with pesto and olive oil, on fresh baked bread. Yumm! 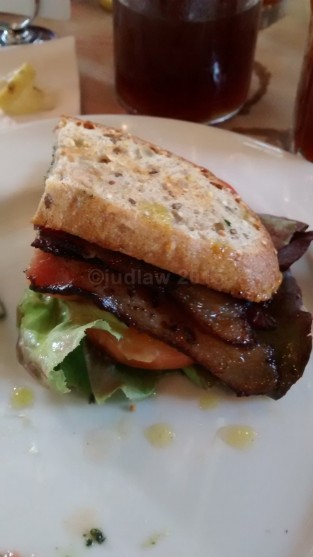 We drove on through Santa Barbara and got onto the Pacific Coastal Highway at Ventura to spend the evening and night with hundreds of other RVers camped along the wall beside the beach. It’s dry camping, but costs only $28.00 a night, limit of five full days (24hrs. each).

We ate our dinner outside, watching the sunset and listening to the waves, which are very calming until you try to sleep. Then they sound like very high winds of a storm and you expect the motor home to be rocking and rolling. That and the sound of traffic on the highway and the trains going along the track between the highway and us (yes, again!) made sleep rather difficult, but there is always a trade-off.

At least most of the trains were quieter Amtrak

At the end of the next day we were more than ready to be settled in one place for the next few months!

When we left Ventura we’d intended to continue along the ocean on Hwy 1, but somehow missed a turn and ended up on 101. At Thousand Oaks we pulled off in search of coffee and could find none, but after consulting a map Jim found a road that would take us back to Hwy 1. I was a little concerned because the map also showed a mountain range, but for the first part we were on a wide city street. Then the city street turned right, and our road kept going straight. Well, straight isn’t exactly correct. The first hundred feet were straight, and then we encountered more turns and steep hills than all of the others we’d been on before! The bends were so sharp that we took up the whole road to make them, and there was no way to see or be seen around them! I think I held my breath with each one, expecting another vehicle to come barreling around and into us. There were some spectacular vistas, and some huge homes on gated properties high up on the mountains that I thought could have been owned by some movie stars. I doubted that they’d have too much trouble with tourists finding them up there!

This sign was at the end. Jim didn’t tell me, though, that he’d seen the same sign at the beginning!

The GPS told us the road, Mulholland Hwy, was only ten miles long, but it took us an hour to get over it, and it gave the engine and brakes quite a workout.

It did take us back to Pacific Coast Highway though, and we were soon at Malibu Beach, hungry and tired. We parked beside the public beach expecting to have some lunch and that long awaited coffee at the café we saw there. It was closed. That’s when we started to learn that this part of California isn’t very RV friendly. We drove on, looking for any sort of restaurant along the highway that had enough parking space for us. Before long we were in downtown Malibou Beach and Jim was determined to find a parking space near the beach. There was a nearly empty parking lot, but it was gated and the fee to park an RV was $32.00 even though we wanted to stay only a couple of hours. We drove up and down some rather narrow streets for probably an hour looking for any kind of parking. One parking lot attendant saw us stop and offered us space (not even sure if we could have gotten into it) for $40.00.

That was enough of taking the Coastal Highway. We got back onto Hwy 101. We drove through the main street of Marina del Rey and Torrance, and could still not find a place to park anywhere near a restaurant. They all had trees too close to the street for us to park. Finally, at El Segundo we got parked and had lunch. We saved the second half of our subs in case we needed them for dinner later. The fridge was pretty empty.

We’d had enough “adventure” for the day so we started looking for RV or camping sites or even a Walmart somewhere near Long Beach. We could find only two listed in any of our resources (Next Exit, The Good Sam RV Guide, and the GPS). I called the Good Sam one first and was informed that they don’t allow enclosed (cargo) trailers in the park, and they had no suggestions as to where we could put ours if we unhooked it! Not the usual helpful response from a Good Sam rep. The other park was actually a small Mobile Home Park that had room for a few RVs, but none that we could begin to squeeze into. On we went, leaving 101 and taking Hwy. 91 to I-5.When we reached Anaheim we found a Walmart that didn’t allow overnight parking, but we bought some groceries anyway and secured a spot at a Good Sam Park just a few blocks from Disneyland. We didn’t go to Disneyland, but we could watch the fireworks from our site that night and rested.

The next day we just drove. We passed through San Diego without even stopping. At 4:30 we set up in an RV-friendly Walmart, had an early dinner and crashed. By 4:00 pm the next day (October 28) we were “home” at our site in Mesa Regal RV Resort, Mesa Arizona, after taking a short side-trip to Los Algodones Mexico to see if “Monica” (the sweet puppy we met last winter) was still there. She wasn’t.

2 thoughts on “RV Adventures from San Francisco to Mesa, Arizona, The final Leg of our Journey”