Our day started at 5:00 a.m. as we needed to be waiting outside at 6:20 to catch a shuttle van to a small airport at Henderson, where we began our Grand Canyon Adventure. After much perusing of brochures we’d decided that, although expensive, the full tour with Vegas 500 was the best value. At the airport we were offered coffee and comfortable couches to sit in, after we’d signed all necessary waivers, while we waited for the plane to be prepared. Pictures were taken, instructions were given and we climbed aboard the nine-passenger Cessna Caravan and were lifted up into the bright blue yonder. It was a cool, but clear day, unlike the two previous days when three of our fellow passengers, who hailed from Ireland, had attempted the tour. This was their last chance, and luck was with them. 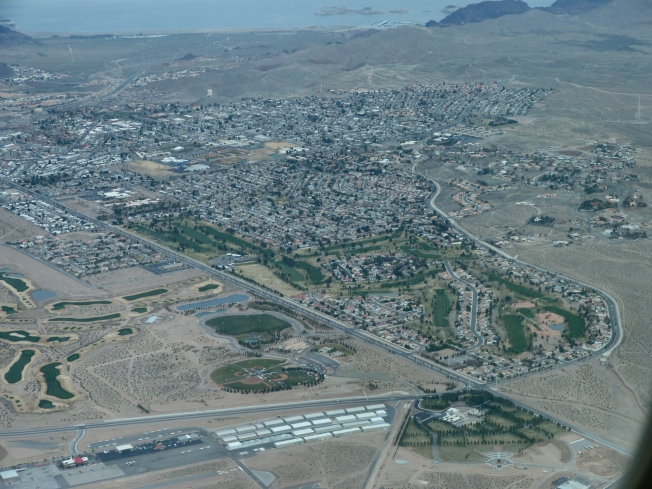 After 20 years of drought, the only green to be seen is on the golf courses

We all had window seats, which made for much picture taking all around as we flew over historical Boulder City, Lake Mead and Grand Canyon West. Upon arrival to the Hualapai Indian Reservation airport our plane pilot got us our arm bands for the rest of the tour. We were thrilled to learn that we had been assigned front seats on the helicopter that awaited us! Lots more picture taking as we dropped over the cliff and down 4000 feet into the Canyon. 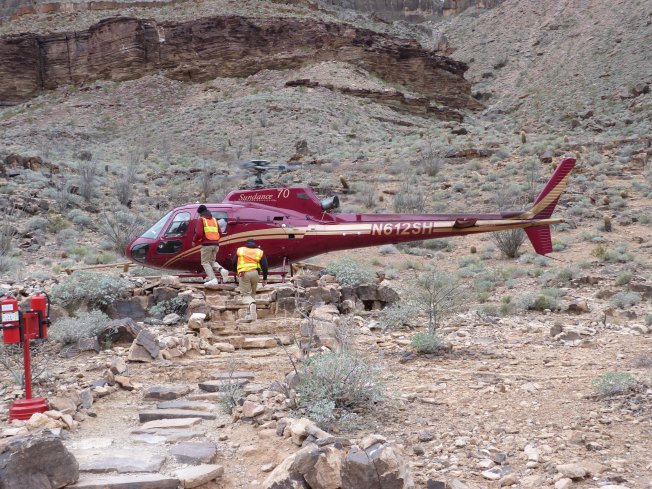 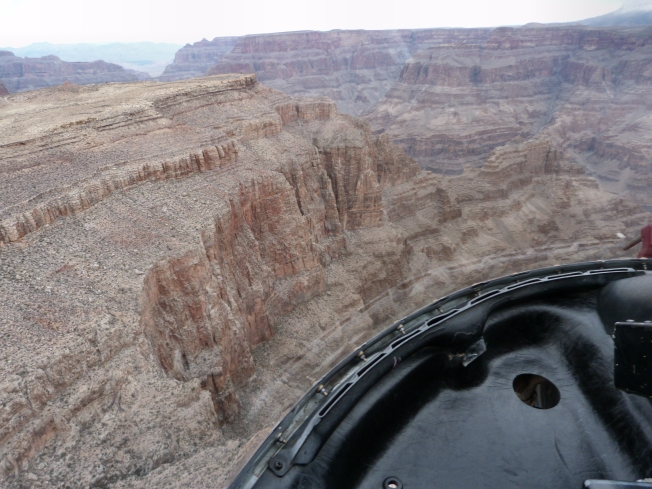 Dropping over the edge

Into Grand Canyon. Note the tiny dock and pontoon boats below

From the helicopter we were hustled down an embankment to a large pontoon boat that would take us on a twenty-minute trip on the Colorado River. Wow!

Trekking down the rocks

View from the Colorado River

Back to the top in another helicopter, we boarded a bus to Eagle Point, where we awed at the vistas and ventured out onto the glass Skywalk. No cameras were allowed here; no phones or purses or backpacks either. Lockers were provided for such items, and we were given cloth booties to put over our shoes before we stepped onto the glass. A professional photographer was available to take as many pictures as we wanted. Of course, they were all beautiful and we couldn’t choose, so ended up purchasing the whole package! When we were ready, the bus was waiting to take us to Guano Point, and then onto Hualapai Indian Village. The designated three and a half hours slipped by too quickly. At the Village we were given a delicious buffet lunch before we had to catch our bus back to the airport for our reluctant return to the city.

Another long, exciting day ended in a very early retreat to our beds while the younger members of the family partied into the wee hours. A text message received long after we’d been asleep told us that one of them had won $1,000 at the slots! Did we want to join them? We had to pass.

Hearing the news today, I’m thankful that we aren’t in Vegas this week. The “shootout” appears to have taken place in very close proximity to our hotel! Of course, it happened in the early hours of the morning, so we probably would have been safe.

On Saturday, we took a break from the lights and boarded a bus to Hoover Dam. We had a very congenial driver who filled us in on some the history of Las Vegas and things of interest along the way. It took us about an hour to get to the dam, where we were immediately taken on a video tour of the building of the dam, then down through the tunnels and into the Generator Room. 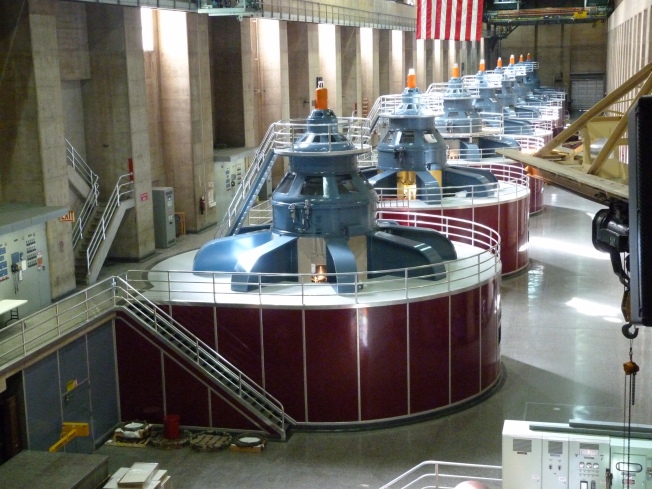 Back up to the top, we were left to explore the museum and gift shop (isn’t there always one of those?) before heading outdoors to take pictures from every angle. 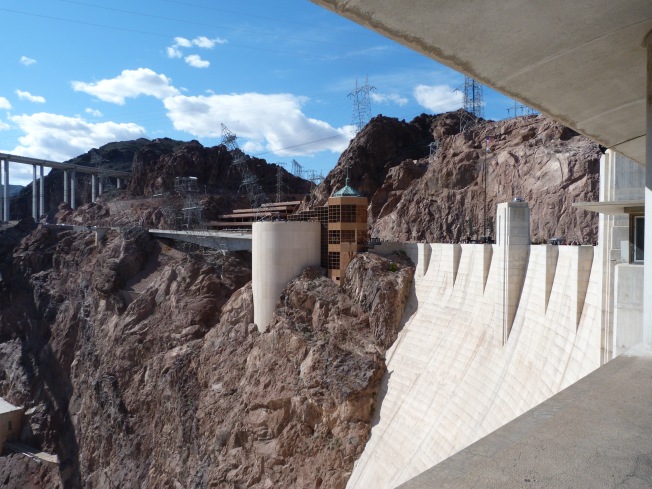 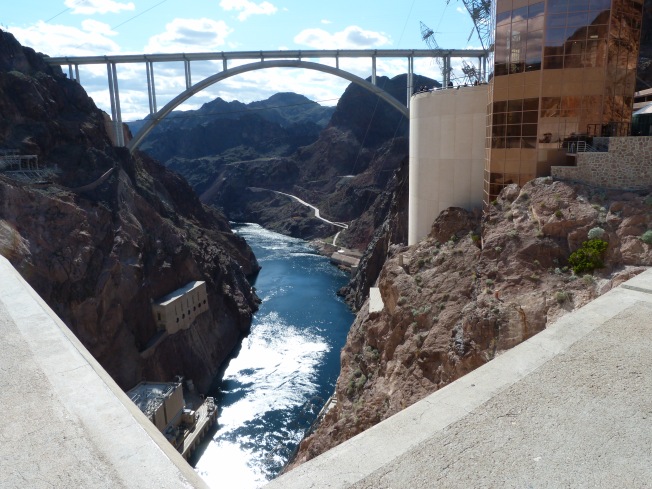 What an impressive feat!

We arrived back on The Strip in time to meet up with the rest of the family at New York New York. They’d arrived while we were gone and were already enjoying the infamous yard high drinks that we’d seen everywhere. We didn’t need to wait for them to finish. Drinks of every sort can be carried along the streets from one establishment to another, the empty containers left anywhere along the way to be surreptitiously picked up by city cleanup staff and re-distributed among the hotel bars.

We watched the Pirate Show outside Treasure Island Hotel and grabbed dinner at Senor Frog, before catching cabs to take us downtown to Fremont Street. 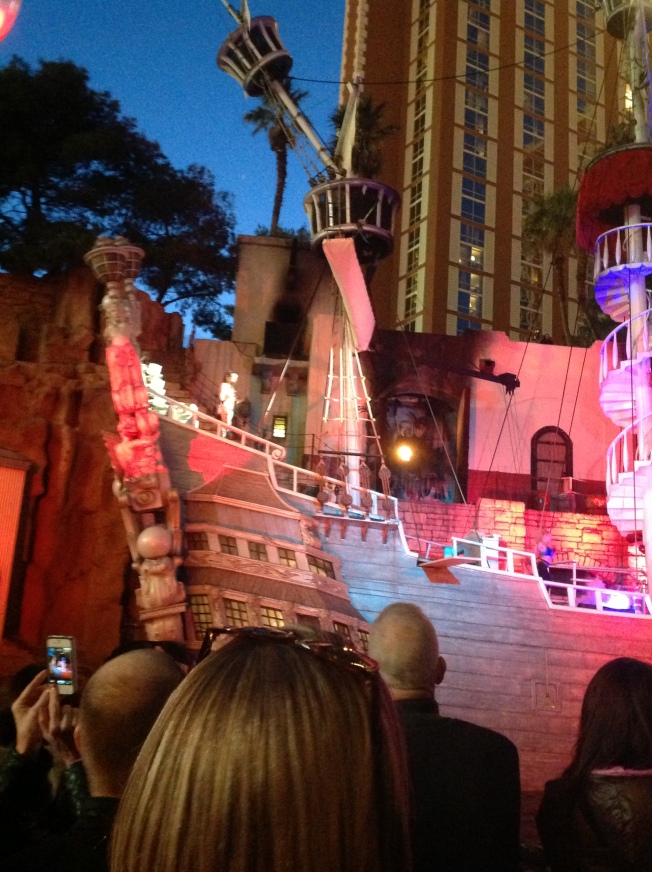 Fremont Street is the older “strip” where the original hotels and casinos can be found. To compete with the flashing lights of the “new” strip, the many-blocks-long street has been closed to traffic and covered with a huge white canvas canopy. Every half hour the throngs of people partying beneath it are treated to a moving light show on the ceiling, each with its own musical theme, such as music by Queen or The Beatles, and you can’t help but laugh at some of the costumes and antics of revellers.

As much as we would have liked to stay to enjoy the show, we had to leave the “young ones” to it because we had reservations at 6:20 am for the Grand Canyon Tour of a lifetime.

Although we aren’t big gamblers or drinkers, Las Vegas is one of those places that everyone needs to experience at least once, right? So after a couple of months of stress and sadness, we decided to join a few of my family members for a whimsical downtime, exploring the never-ending themes of Las Vegas. Of course, visits to the natural wonder of the Grand Canyon and to Hoover Dam had to be included in the itinerary as well!

For us, leaving from Toronto and choosing a cheap flight meant a ten-hour trip, unlike the short jaunt for the rest of our party flying from British Columbia, but we arrived a couple of days ahead of them.

Before I share with you all of the fun we had, I’m going to get a few warnings out of the way. We soon discovered that you can lose money very quickly without even entering a casino.

1.  If you take a taxi from the airport to your hotel, tell the driver that you want to go via city streets. It was after 10:00 pm our time when we climbed into our cab, headed for the Flamingo Hotel.  The  driver asked, “Do you want to take the highway or the city street?”  As newcomers we naturally thought the highway would be the quickest route. He saw us coming! What should have been a $15.00 drive cost us $30.00!  We also learned later that the extra $5.00 “airport fee” that he tacked on was already included in the rate.

2. When you find yourself hungry after you’ve checked into your hotel, don’t head to the nearest hotel eatery that you see. Two large salads and ice tea at Carlos & Charlie’s Bar and Grill in the hotel cost us $37.00. Two simple bacon and egg breakfasts with one orange juice and two coffees the next morning at the convenient  Tropical Breeze came to a grand total of $36.00. The orange juice alone was $5.00! The bacon made me thirsty so I picked up a bottle of water at one of the fast-food stands in the lobby.  I was prepared to pay $2.50 or $3.00, but it was $4.50 for half the size of bottle that I’d purchased at the airport for a dollar less.

3.  Everywhere you turn you will be bombarded by pushy people offering “free” breakfast and tickets to shows, just for agreeing to tour a time-share condominium by Wyndham, owners of 80% of the hotels and condos in Vegas. If you don’t mind spending the time, it’s worthwhile, but know that the two-hours they assure you it will take will extend into three or four hours if you don’t want to purchase a time-share. The sales people will try all sorts of tactics and discounts to get your signature on the bottom line.

4.  There is no free Wifi in the hotels, and it’s expensive to purchase. That’s why I was unable to post each day. Denny’s Restaurant and some of the shops in The Forum do have free access.

We did get a $5.00 gambling voucher and “free” tickets to see the shocking yet funny comedian, Vinnie Favorito, at Bugsys Cabaret when we registered for our Total Rewards Cards. Free is in quotes because there was a catch – we had to prepay for two alcoholic drinks, about $18.00 .

After our expensive late-night dinner, we’d revived enough to want to head out onto “The Strip”  and begin our adventure. 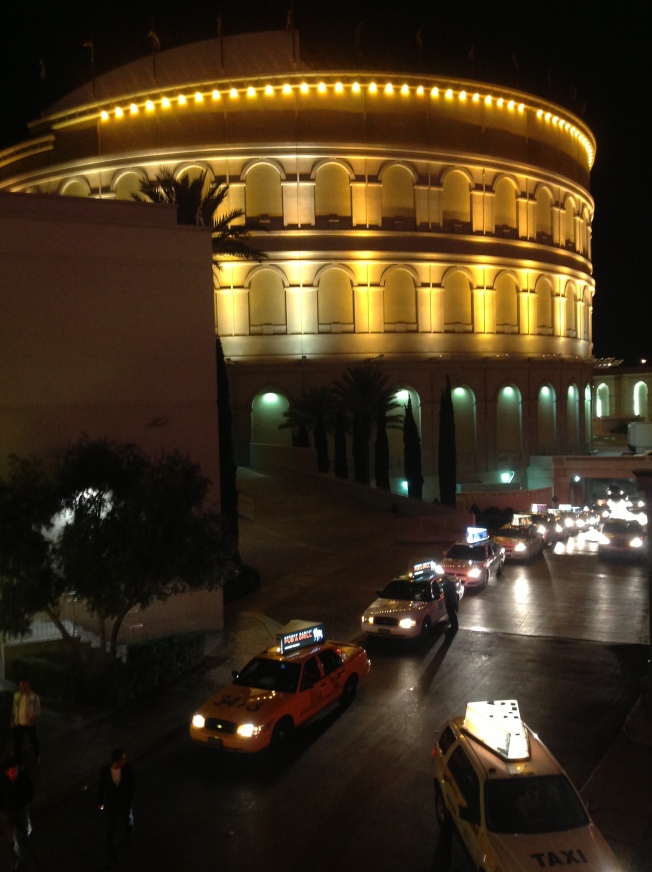 Blue, sunny skies on the inside of Caesar’s Palace

The Flamingo Hotel is still undergoing renovations, and new construction is taking place in the lot next door. Our room was clean and very adequate for the amount of time that we spent in it, but we were awakened, sometimes as early at 4:00 a.m. (Las Vegas time) by the sound of jack hammers and vehicles backing up right outside our window. We were offered an upgrade when we checked in, but chose to save our money for more interesting things.

The back exit from the hotel led us through this lovely garden complete with live flamingos, swans, ducks and Koi fish enjoying the ponds. 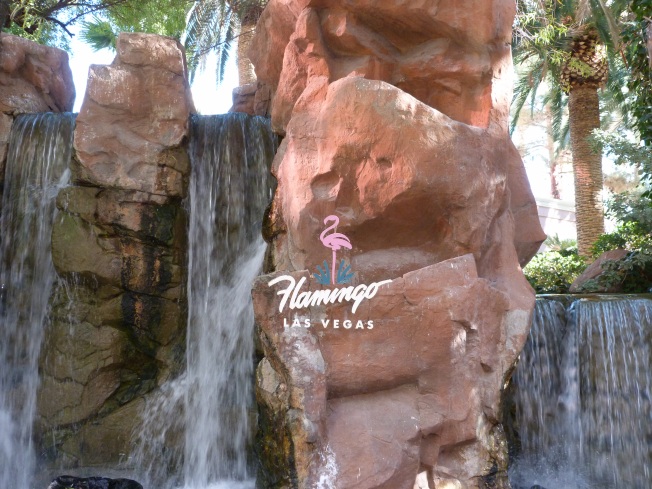 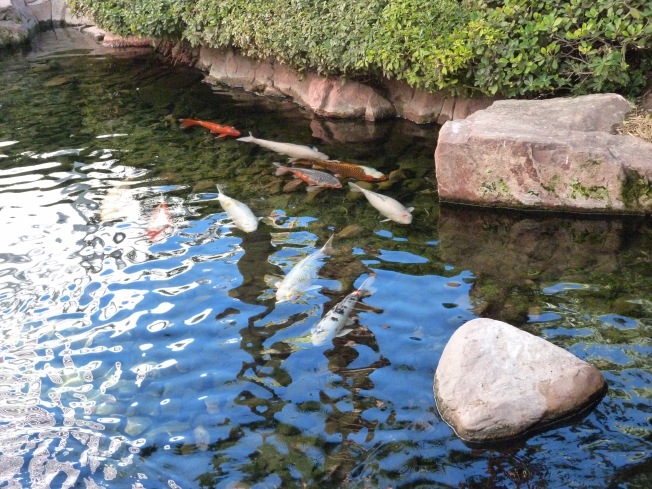 Every hotel has a theme, and over the course of the next five days, we explored most of them at least once.We took a ride on a gondola through the streets of “Venice” at the Venetian Hotel.

And strolled through the streets of Paris. 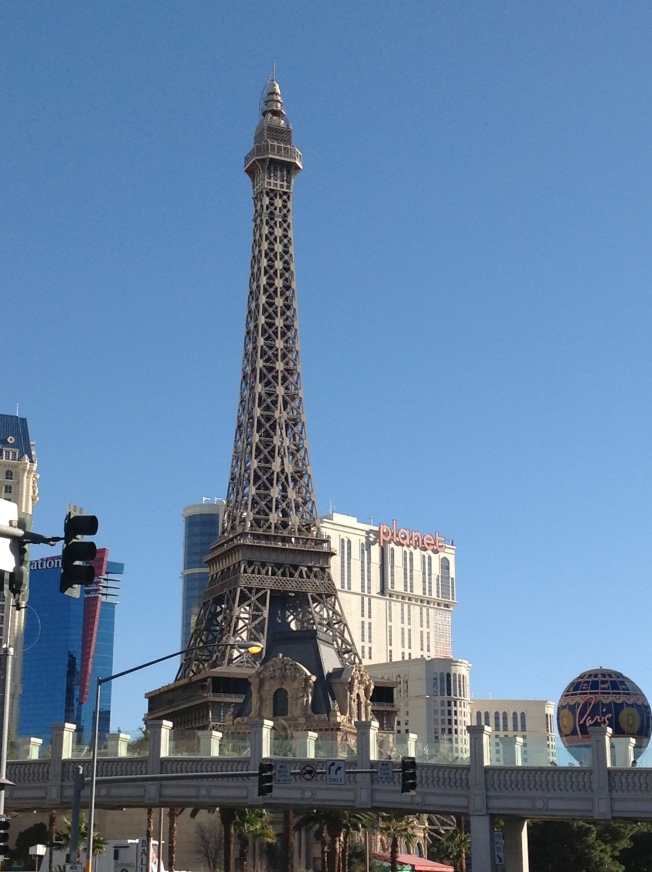