If all goes according to plan, we will be leaving for Arizona one week from tomorrow. I haven’t had anything new to write about for the past month because, other than visiting family, we’ve been staying close to home. And because, I have to admit, I just didn’t feel much like writing, anything.

What I have been doing, besides playing pickle ball and ukulele,  is trying to piece together some quilt blocks using some of the many pieces of fabric and a few completed blocks that my mother had left from her years of making her whole family at least one, if not two, beautiful old-style quilts. I remember some of the fabric as being left-over from some of the clothes that she, or I, had made for me or my children.

I’ve done a lot of sewing myself since I first learned in high school, but my only attempt at quilting was a small patchwork wall hanging that I made for my daughter, featuring a picture of some of her pottery, when she graduated from Kootenay School of Arts more than ten years ago. 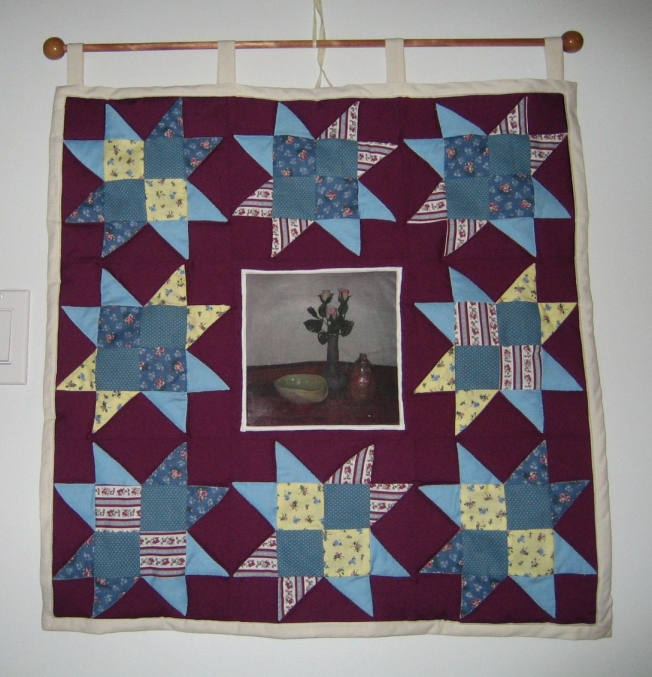 So last winter I took what I had down to Arizona and a friend, who is a master of making quilts, helped me decide what I could do with what I had. I would need some more fabric to balance out the pieces that Mom had, and she took me shopping for that. Next, I bought myself an inexpensive sewing machine (I hadn’t taken mine with me) and the necessary cutting and measuring tools. But then, we both got busy with our own lives and I spent only a few hours sorting the pieces.

A couple of months ago Jim finished off an area for me to use as a sewing room in our basement storage area, and I finally got to work. But it’s been a challenge. The blocks that Mom had made were a combination of squares and triangles. My friend measured the squares and figured out what size square I’d have to make to create more triangles to go with them, allowing for the joining seam,

I thought I had it all figured out. Starting with pieces that Mom had already cut, I put together my first block. Sadly, it was smaller than the blocks that Mom had. I looked more closely at Mom’s and discovered that she’d used a much smaller seam allowance! I took it all apart and redid it, using the same smaller seam. That made only a little difference! Frustrated I left it for a week or so, thinking about it.

I finally went back and took one of Mom’s blocks apart to see what the difference was. I learned that her triangles weren’t true triangles, and they were actually smaller than what I’d expected. But some of her squares were bigger. I wondered how she’d managed to put together those decent looking blocks, and why nothing was exact.

Eventually it occurred to me that, from the evidence of the pen outlines on the pieces of squares and triangles, Mom had drawn out each piece before cutting it. She must have made herself a pattern. I have no idea how she figured out what size triangles she needed, but she must have adjusted the edges to match the edge of the square that she had to sew them to.

I trimmed the squares that needed to be; I could do nothing about the triangles and I couldn’t replace them because I had none of the whole pieces of fabric, so I made a pattern to match Mom’s so any new ones would be the same, and I adjusted the best that I could. I put Mom’s block back together, and put together a new one, using the same seam allowance for both. I was thrilled to find that they both came out pretty close to the same size and alignment, needing only a little trimming. However, they were smaller than the originals. I’ve had to adjust the other three completed blocks to match, and I’ve started putting new ones together. 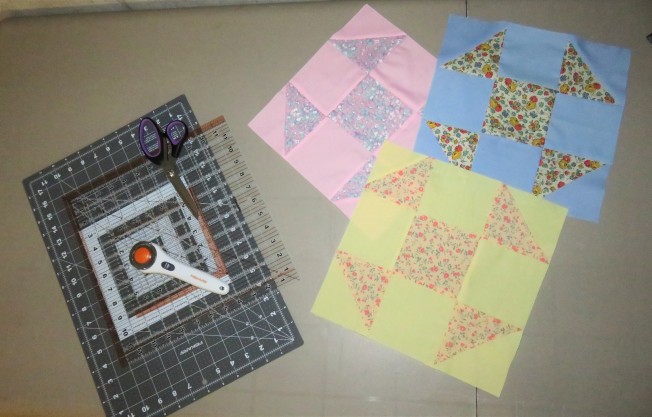 More adjustments need to be made along the way. It will be a slow process to complete this quilt, but I feel that I need to do it. It is teaching me much more than just how to create quilt blocks.

It has given me a new understanding and admiration for my mother. When I think about it, I know why she didn’t get the triangles and squares all conformed; I know why her triangles were not right-angle triangles. When my mother was in school, back in the early 1900’s, complicated math didn’t exist in elementary school. In fact, it didn’t exist in elementary school when I attended either. Arithmetic, which consisted of learning to add, subtract, multiply and divide, was what we learned. Like so many girls, and many men of Mom’s era, she never got to go to high school. She never learned geometry. She never knew anything about triangles or equal sided squares.

So how did she learn to piece together quilts? She must have learned from her grandmother (who raised her after her mother died), who learned from her mother. I’ll bet they all had cardboard or newspaper patterns that might have been passed down through the generations, and possibly grew smaller or misshapen over the years.

Mom, you would be blown away if you could see the amazing quilts being made today!

But, you may or may not be impressed to know that they are mostly done with the help of machines, not hand-stitched at quilting bees as yours were.

6 thoughts on “Piecing Together Memories and a Quilt”